It's almost time.  Are you guys ready?


Harry Potter and the Deathly Hallows: Part 2 comes to theaters on July 15th, 2011.  This movie marks the end of a series of 8 movies spanning across 10 years.  It is the last vestige of a beloved fictional story, which first came to life on a train in Kings Cross Station, London, 20 years ago.  This concluding film marks the end of an era for dedicated fans everywhere.  Many of us grew up with Harry, and with each Hogwarts year that he matured, we also matured.   Others got to work backwards, starting at adulthood and reliving their childhood dreams through each page.  Still others discover their love of the Wizarding World each day, even now.  Young and old across the earth have found a friend and a hero in Harry Potter.  And now, we must say goodbye.

Those who haven't read it don't get it.  There are also those who just couldn't get into it.  For them, the only reason to celebrate this last movie is because the Pottermania will finally be over.  That's fine.  But for us fans, Harry Potter will never really end, because it isn't just a story.  It's a world of learning and growth, of laughter and tears.  On those books' pages, we learned the value of courage, wisdom, loyalty, and ambition; of sacrifice, friendship, and love.  It's the magical realm where we decided exactly where we stood in our own lives, morally and intellectually, and realized our true potential as human beings.  I know the story has it's limits -- it's a fictional universe, after all -- but I would go so far as to say that in some measure, either small or large, Harry Potter defined our lives.

With that in mind, fellow friends and fans, I propose that we celebrate the end of this saga in a manner that truly reflects how dear the series is to us. If we have to say farewell, let's go out in style!

So we are introducing part two of our Harry Potter cookery.  Anna and I have been planning out the best selections from the books (that Julie and I haven't already covered during our first Harry Potter Food Week) in order to provide you with as many delicious options as possible during your last hurrah with Harry.  We have about two weeks worth of recipes that we are definitely going to share with you (so those of you who cringe at the word "wizard," it's probably best if you avoid the blog for the first half of July).  That's right, when we say this is Harry Potter Food Week 2, we not only mean that it's the second installment, but that it will last 2 weeks.   This should be enough time and build up that you readers can cook up some of the food for yourselves before the big premiere.

However, we would like you to help with a few recipes we are having a hard time narrowing down.  In the left sidebar is a poll.  We have a few choices for you, and you can select the treat which you would most like to see us make.  Reminder: we are cooking a lot more than just those options, so don't fret if the thing you really want us to make isn't there.  However, if you're really worried that we'll miss your favorite Potter treat, please leave a comment on this post with your suggestions.  If it's not already in our list of foods we're for sure going to cook, we'll add it to the poll.  When the poll expires on July 7th at 11:59 p.m., Pacific Daylight Time, we'll whip up the recipe with the most votes.

In the meantime, however, I still have 2 or 3 more posts for the tea party to finish up this week. So don't go away just yet, Anti-Potter people!  We've got something for everybody. 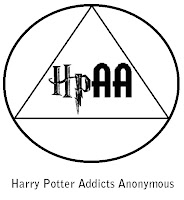 It occurred to me that other fans might like to have this image as well.  I spent quite a lot of time on it, and I would hate for it to go to waste, so I thought I'd share it with you.  If you would like a "Harry Potter Addicts Anonymous" badge for your blog/site during the close of the Harry Potter season, feel free to use this html code:

The link leads back to this entry, so anyone who follows it will be able to get one, too.
Posted by Mary J. Locke at 4:57 PM

I started off liking Harry, but after a few books, I didn't anymore. I certainly gave him a fair shot, but he failed to enchant me.

I LOVE Harry Potter, and also have the Lego set!! :D I recently made a review on Harry Potter as well! :)