I am not into the sappy romances. Every time I watch a romantic comedy, and it comes to the cutesy ending scene, I get all squirmy and hide under a blanket until it’s over.

Really mature, I know.
For this reason, I’m not Nicholas Sparks’ biggest fan. I don’t have anything against him, but I have a hard time controlling my scoffs and eye-rolls during his books and movies when things get cheesy (which is often).

However, Sparks’ book Safe Haven (which is also a movie that came out this year) caught my attention because it mentions Fried Ice Cream. And I really wanted to make fried ice cream. 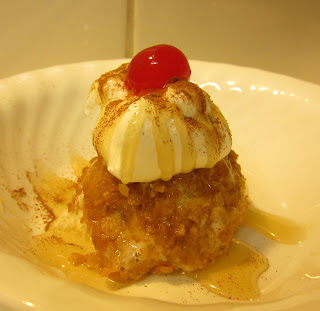 When the couple is talking about going to a local carnival (which in the movie is changed to a parade), the dashing male love interest, Alex, says to the mysterious, beautiful out-of-towner, Katie,
“‘And if you ask me nice, I’ll treat you to some deep-fried ice cream.’
“‘Fried ice cream? It sounds disgusting.’
“‘It’s actually tasty.’”


(I forgot to write down the page number before I went out of the country, but it’s toward the end of the book, before the climax.)


Yeah, that’s not a very big role that my little treat plays, but like I said, I really wanted to make fried ice cream.

Actually, it is. And it’s super easy. And delicious.


For the recipe, I just followed this video:

But if you want it written out, here’s the recipe. It looks way more complicated than it really is, I promise.


It sounds complicated written out, but I promise it’s not. Just watch video like I did and you’ll be fine.

A cool thing about this treat is that once you freeze the ice cream with the egg whites and cornflakes on them, you can keep them in the freezer and pull out an ice cream ball to fry whenever you want! Perfect for serving at small parties when you want to show off!
Posted by Mary J. Locke at 10:36 AM

This is so cool! But... I think I'd want more ice cream than that one little scoop.

Thanks for the information. If you can write on short stay parking gatwick parking system that’s good for the readers.

It's a time to experience Oui French style yogurt made by participating in the Say oui sweepstakes at Sayouisweepstakes.com page.