I did my undergrad in Virginia. When I think of the South, I think of patriotic parades, kind smiles, and lots of bugs.


But the food! Oh man, the food is one of the best things about the South. It may be the death of you, but the taste experience is like heaven on earth.

Yeah, I’m kind of encouraging unhealthy eating right now. Let me make up for it:

Kids, eat your vegetables!
And no, onion rings and zucchini fries don’t count!

But seriously, down home Southern food is amazing. And as long as you only eat its wheelbarrow-full of calories occasionally, I don’t feel bad encouraging a little grease consumption. James Weldon Johnson, author of The Autobiography of an Ex-Colored Man, seems to agree.

In his deceptively fictional “autobiography,” Weldon illustrates the hypocrisy of racism in the United States. His short novella is packed with wit, culture, and hard-hitting truths. It’s a must-read, in my opinion.
During the narrator’s journey to figure out his own identity as one who straddles the white and colored world, he finds his way to a home-cooked Southern breakfast.


“And the breakfast, simple as it was, I could not have had at any restaurant in Atlanta at any price. There was fried chicken, as it is fried only in the South, hominy boiled to the consistency where it could be eaten with a fork, and biscuits so light and flaky that a fellow with any appetite at all would have no difficulty disposing of eight or ten. When I had finished I felt that I had experienced a realization of, at least, one of my dreams of Southern life.” (Johnson 27)

I start to drool every time I read that passage. Oh my yum! It also makes me a bit nostalgic.
In order to slake my longing for the Blue Ridge Mountains, I decided to fry up this meal. Although, sorry, I didn’t eat it for breakfast. 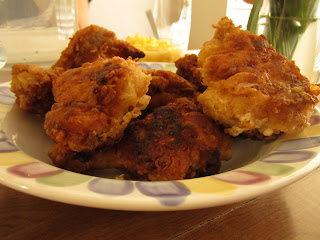 
Place all ingredients in a plastic bag, and shake/massage to mix. Let sit for 15 minutes. While the chicken is saturating the spices, do the other steps below.


Cover the bottom of a heavy-bottomed skillet (we used cast iron) with ¼ inch of oil (we used Canola). Heat on medium high heat until a pinch of flour starts to sizzle when dropped in the hot oil (but not so hot that the pan is smoking). Remember when working with hot oil, always have a metal pan lid and baking soda close by in case of a grease fire.

Place chicken pieces in a gallon plastic bag with flour mixture and shake until thoroughly coated. Add chicken to hot pan and fry for about five minutes on 1 side, then rotate and fry for 5 minutes.  Repeat this process until the chicken is golden brown (should take about 20 minutes total).  You can also cut a piece of chicken to see if it is no longer pink.


Take care to make sure the oil is hot enough to cook the chicken, but not so hot that it burns it.
Use tongs to remove chicken from pan. Place on a rack over a cookie sheet or broiling pan for the excess oil to drain. Add more salt and pepper to taste, if desired.

My friend Lori helped me out with cooking the chicken, since she’s more experienced at it. Check out this beautiful chef! 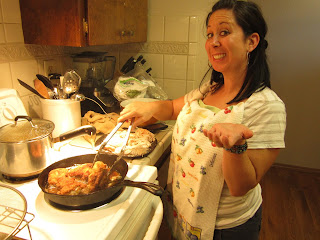 This is some of the best fried chicken I’ve ever had. No joke. I think soaking the uncooked chicken in the spices made all the difference.


And don’t forget about the biscuits! Holy cricket, they’re amazing! 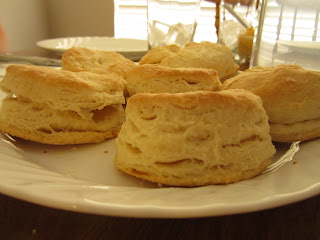 These babies 100% live up to the description, “biscuits so light and flaky that a fellow with any appetite at all would have no difficulty disposing of eight or ten” (Johnson 27).
Recipe:
**Note: You can use 2 cups Biquick instead of the above 3 ingredients, if you prefer. I used my homemade bisquick.**

Combine the dry ingredients in a bowl. Cut the butter into ¼ inch chunks and cut in to the flour until it resembles course meal. Add the buttermilk and mix JUST until combined. If it appears on the dry side, add a bit more buttermilk. It should be very wet.

** I didn't have buttermilk, so I used this handy buttermilk substitute. Works like a charm every time.**

Turn the dough out onto a floured board. Gently, gently PAT (do NOT roll with a rolling pin) the dough out until it's about 1/2" thick. Fold the dough about 5 times, gently press the dough down to 1 inch thick.  Don't go too thin or the biscuits won't be moist.  Also, be careful not to handle the dough too much -- you don't want all that butter to melt.

Use a round cutter or the top of a drinking glass to cut into rounds. You can gently knead the scraps together and make a few more, but they will not be anywhere near as good as the first ones.
Place the biscuits on a cookie sheet- if you like soft sides, put them touching each other. If you like"crusty" sides, put them about 1 inch apart- these will not rise as high as the biscuits put close together.

Bake for about 10-12 minutes- the biscuits will be a beautiful light golden brown on top and bottom. Do not over-bake.

These are the best homemade biscuits I’ve tried or made. I’ve made this recipe multiple times, and the key to their deliciousness = butter. Don’t go halfway on these babies, or they won’t be any good (so NO margarine, shortening or lessening the proportion of fat). The more butter, the better.


I made the hominy, too, but I didn’t really do it right. I think the hominy James Weldon Johnson is describing is hominy grits (“hominy boiled to the consistency where it could be eaten with a fork”), which comes out to be more like a hot cereal, from what I understand. The only hominy I have access to in California, though (at least at normal grocery stores), is canned hominy. It’s kinda gross – like undercooked and oversized corn kernels. I did my best to boil it as described, and added a little salt and pepper, but I consider it a failure. It just tasted like canned hominy, in the end. So… let’s just remember how awesome the chicken and biscuits were and move on.

Yeah, this meal is unhealthy.  But my mantra when it comes to food is “everything in moderation.” Once in a while, you just need some Southern comfort food. 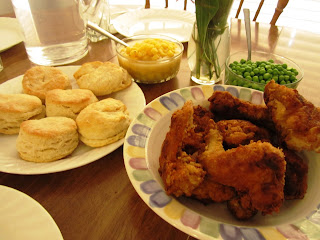 Thanks for the information I really appreciated that you shared your great piece of work. I used this long stay parking Gatwick parking system.