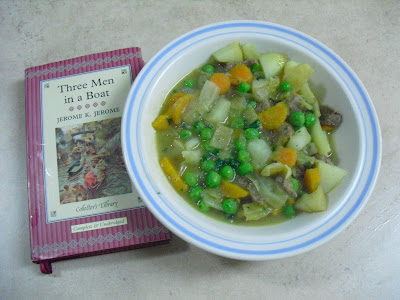 Today I’m going to talk about one of my favorite non-children books.  Three Men in a Boat (To Say Nothing of the Dog) is a book nobody in America seems to have heard of, but everybody should read.  It’s a hilarious story about three Englishmen in the late 1800s, all the best of friends, who decide to take a boat trip down the Thames.  The book is of their adventures while they’re packing and on their trip, as well as a lot of random digressions from the narrator.  The best parts are in relation to food.  For instance, there’s a huge long part about them trying to open a can of pineapple without a can opener, and the injuries to pride and person that result from it.  I reread that part recently, and I was nearly crying from laughter.

I first heard about Three Men in a Boat when I was traveling in England.  While we were visiting Hampton Court Palace, some of us sat next to our tour guide, Ian Godfrey, at lunch.  He asked us if we had gone through the hedge maze on the grounds. 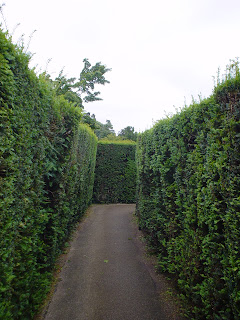 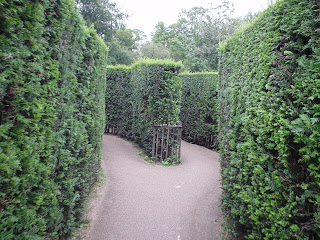 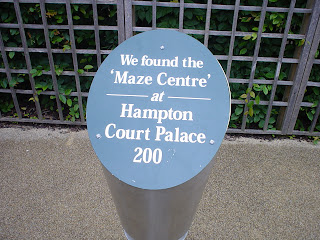 I had, and we talked about people getting lost in there, and the technique for how to get out (I won’t tell you, so that if you’re ever in the Hampton Court Palace maze you can relish in getting lost and figuring it out yourself).  Then he started chuckling to himself.  I asked him what was so funny, and he asked if I had read Three Men in a Boat.  I said I hadn’t.  He continued chuckling to himself as he explained that it was “a very English book,” “a classic,” and “quite silly.”  (I remember during this conversation just relishing in the fact that I was having a conversation with a real Englishman.  His accent was awesome!)  He talked about a particular part of the book, where the characters go into the Hampton Court Palace maze, and get so hopelessly lost that they end up electing a leader and charging about the maze trying to find a way out.  I was totally interested, if only for the cultural aspect – A famous English book that they don’t talk about in America, which has a scene that takes place where I’ve been?  I was all over it.  And the fact that it was supposed to be funny put it at the top of my reading list.  I’ll never forget Ian saying the author of the book, all slow and poetically as only a true Englishman can do: “Jerome K. Jerome.”  He repeated it several times, and I promised I would check it out.
So when I got to Oxford, and I had a tortuous couple of days to wait for the 7th Harry Potter book to come out (how do I manage to sneak Harry Potter into everything?  I astound even myself), I decided to go to Blackwell’s Bookshop and buy Three Men in a Boat.
I am forever glad I did.  It’s rich with English humor: ridiculous yet subtle, absurd and yet strangely mundane.  Every bit of it is entertaining – I never got bored reading it.  It's also 100% clean, which is a necessary qualification for me, and very difficult to find.  Plus, I got a kick out of reading parts and thinking, “I’ve been there!”  I loved it so much that I shared it with a bunch of my family members and friends when I got home.  Everyone who read it loved it.  I think it’s now one of my sister Sarah’s favorite books.
I hope that through my ramblings and reminiscences, you get the point: This book is awesome!  And I was delighted, upon rereading it, to realize that it mentions TONS of food!  So I’m going to be posting twice about this delightful, “very English” little book.  Tonight’s feature is Irish stew.
While camping on the bank of the river Thames, the three men – George, Harris, and J (the narrator) – decide that “it would be a splendid opportunity to try a good slap-up supper.  [George] said he would show us what could be done up the river in the way of cooking, and suggested that, with the vegetables and the remains of the cold beef and general odds and ends, we should make an Irish stew” (Jerome 191).
This would be a wonderful idea, except that none of these men really know how to cook, and George’s understanding of “Irish stew” is shaky at best.  He seems to think that Irish stew is just a bunch of leftovers boiled into a stew.  This doesn’t sound too bad until he starts adding pork pie, cold boiled bacon, and half a tin of potted salmon to the pot.  “He said that was the advantage of Irish stew: you got rid of such a lot of things.  I fished out a couple of eggs that had got cracked, and we put those in.  George said they would thicken the gravy” (192).  They even considered adding a dead water-rat the dog had found.  Fortunately, after some debate, they decided to decline the dog’s offering.
In terms of how the stew actually tasted, J says: “here was a dish with a new flavour, with a taste like nothing else on earth.  And it was nourishing, too….  The peas and potatoes might have been a bit softer, but we all had good teeth, so that did not matter much; and as for the gravy, it was a poem – a little too rich, perhaps, for a weak stomach, but nutritious” (193).
You may be wondering, “Why, Mary, after reading that nasty description, would you ever consider making such a stew?”  Good question.
This whole Irish stew business made me curious.  Clearly George didn’t know what he was doing, so what is a real Irish stew supposed to be like?  I looked it up.  Turns out Irish stew has a pretty set recipe for it’s base – it usually consists of lamb, potatoes, and onion.  Other ingredients vary, but it will commonly also include carrots, cabbage, and parsley.
I decided that didn’t sound nearly as bad as the Three Men in a Boat stew.  I actually wanted to try it.  I figure Jerome K. Jerome wrote so well about the preparation and final product of George’s stew that I could deviate from the literature a bit and make a proper Irish stew (except for the lamb, because I’m cheap).  You can choose for yourself which one you’d like to try.
Irish Stew
Serves 3-4 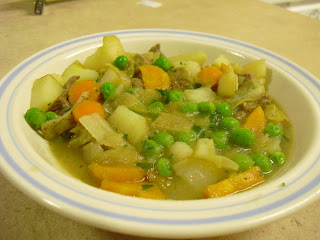 The great thing about this stew is that overcooking the potatoes is okay, because it thickens the broth to the characteristic “stew” consistency.  (Please don’t add eggs to thicken the gravy like George did.  Follow these tips for thickening stew.)
This stew was delicious!  Seriously, it was awesome!  It was simple and easy (although I was hungry, so I didn’t like waiting over an hour for it to cook), and it definitely had a distinctly Irish flavor while not being too cabbagey or parsleyish.  What is it about potatoes, cabbage, and parsley that make you think of green hills, flutes, and Riverdance?  It was a nice way to bring me back to my family roots.  I might make this for St. Patrick’s Day instead of corned beef and cabbage (which is a family tradition and definitely good, but the stew is a better).
I would like to thank Ian Godfrey – who I’ll never see again, I’m sure – for pointing me toward such an amazing book, which led to many laughs and such a yummy dish.  Next week’s post will feature a dessert from Three Men in a Boat (I cooked it tonight, so I promise I’ll post it soon).  Be sure to come back then and check it out!  In the meantime, go to your local library and check out Three Men in a Boat.  Seriously, you won’t regret it.
Posted by Mary J. Locke at 12:49 AM

The stew looks really good. I'll have to try that. Love that book.
By the way, they aren't old and retired. I thought they were young, single men in their twenties. Three men in a Bummel is supposed to be set 10 years after Boat and they are in their 30's and married in that book.