As I mentioned in my previous post, I'm in Finland!

Since I've been here, I've had the opportunity to talk to several native Finns, including a woman whose amazing cooking skills I witnessed firsthand.

I asked this woman (We'll call her Mrs. V, since it's illegal in Finland to put people's personal information online without permission, including names) what she would say is the quintessential Finnish food that she would recommend to a foreigner.  Mrs. V said that if you go to a restaurant, the most classic dish is one from Lapland (way northern Finland, up in the Arctic Circle), and it is reindeer meat served with mashed potatoes and lingonberries (I will be trying this asap!).  But for the kinds of foods Finns eat at home, the most classic dish is "a macaroni casserole with meat and egg-milk, baked."

This bit about the macaroni casserole intrigued me, because before I came to Finland I was reading a Finnish children's book called Moominsummer Madness, which is the 4th book in the very popular Moomin series by Tove Jansson (it's also a comic strip).  The series is very uniquely illustrated, and has a beautiful flavor of childhood in a fantastical Finnish forest.  It's also really funny, in a British sort of way, but different, if that makes sense.  It's just a great series, reminiscent of Winnie the Pooh, and I will definitely be reading it to my future kids. 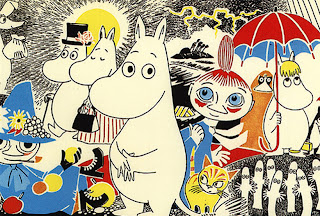 In Moominsummer Madness, the characters' home is flooded.  Instead of despairing, though, the young male character, Moomintroll (who is illustrated to look kind of like a hippo, as are his parents), decides to swim down into the pantry for breakfast ...with his parents' permission, of course.

"Inside," Jansson describes, "the water was white with milk, with a few specks of loganberry jam thrown in.  A couple loaves of bread passed him slowly, followed by a school of macaroni" (24).
The image of a "school of macaroni," like fish, floating through a flooded pantry, really stuck with me.  It's just a cool image.  But I also wondered why on earth such a quintessentially Finnish book would have macaroni, an Italian noodle, featured in it.

But after talking with Mrs. V, it made sense.  The beef-and-macaroni casserole that she described (called "Lihamakaronilaatikko") is one of the most classic Finnish foods you can eat, something that the majority of native Finns eat at home regularly.

I decided to try macaroni casserole in Finland at the first opportunity, in the spirit of the Moomin series.  I spotted it quickly during my visit to a local Prisma (which is like a super-duper Walmart -- meaning bigger and better), and bought a package.  It was just as Mrs. V described!  And it was quite good, although a tad bland.  Apparently, though, most Finns eat it with ketchup to spice it up a bit.

I looked at the ingredients carefully (after translating them to English) and then searched for a recipe for you guys.  This recipe below is almost exactly what I ate.  It's a very simple dish, and apparently a huge hit with Finnish kids who aren't big fans of strong flavors.  Try it with your kids!


2 cups macaroni
6 1/4 cups water
2 beef bouillon cubes (or equivalent as directed on packaging - about 2 tbsp.)
2/3 lb ground beef
1 onion
1/2 tsp salt
1 tsp black pepper
parmesan cheese
"Egg-milk"
3 eggs
3 cups milk
1 tsp salt
1/4 tsp white pepper
Boil the macaroni in beef broth (water with bouillon cubes) until almost cooked, drain. Chop the onion into fine pieces. Add the ground beef and onion to a saucepan and allow them to brown. Season with salt and pepper. Mix the macaroni and beef together and then pour into a greased oven casserole. Mix together the eggs, milk, salt, pepper and pour over the macaroni-beef mixture. Sprinkle top with parmesan cheese and add a few pats of butter on the surface. Cook at 350 F for approximately 1 hour.  Serve with ketchup
Here is a bunch of Moomin paraphernalia I spotted in Prisma.  I was really excited that I knew what it was.  Obviously, that series is quite popular here. 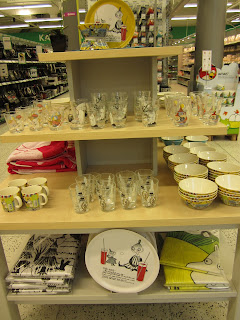 You have to show me the books when I see you!

Did you know you can shorten your links with AdFly and make money for every click on your short urls.

TellGameStop.com and participate in the Tell gamestop sweepstakes to provide your feedback regarding its product and service and win 1 of 25 $100 GameStop gift card.

You can find Free business Listing Websites in India