Tonight is the midnight release of Harry Potter and the Deathly Hallows: Part 1!  I am beyond excited.  I'm leaving in soon with some friends to go wait in line outside of the theaters.  Midnight couldn't come soon enough!

As a treat to munch on while we're waiting in line for hours, I made pumpkin pasties.
Cornish pasties (the ‘a’ is pronounced like the ‘a’ in ‘crash’ or ‘at’) are a common treat in Britain. They are basically beef stew packed into a flaky, folded-over pie crust.  They are delicious and portable, which is awesome.  You might be picturing hot pockets right now, but I assure you, pasties are way better.   I got to try one in Oxford for lunch while I was strolling through the town, and I think it was among my favorite English foods.
Pumpkin pasties are J.K. Rowling’s invention, so there’s no particular recipe to go with them.  But if you think about it, it’s logical to assume that they are like pumpkin pie, only in a pocket.  So basically, they’re destined to be delicious.
Pumpkin pasties are first mentioned in Harry Potter and the Sorcerer’s Stone (or Philosopher’s Stone in England), when Rowling describes Harry’s first experience on the Hogwarts Express.  The food trolley rolls up to Harry and Ron’s compartment, and “a smiling, dimpled woman slid back their door and said, ‘Anything off the cart, dears?’” (Rowling 101).  From there, Harry beholds a cornucopia of Wizarding treats.

He had never had any money for candy with the Dursley’s, and now that he had pockets rattling with gold and silver he was ready to buy as many Mars Bars as he could carry – but the woman didn’t have Mars Bars.  What she did have were Bertie Bott’s Every Flavor Beans, Drooble’s Best Blowing Gum, Chocolate Frogs, Pumpkin Pasties, Cauldron Cakes, Licorice Wands, and a number of other strange things Harry had never seen in his life.  Not wanting to miss anything, he got some of everything and paid the woman eleven silver Sickles and seven bronze Knuts.
Ron stared as Harry brought it all back in to the compartment and tipped it onto an empty seat.
“Hungry, are you?”
“Starving,” said Harry, taking a large bite out of a pumpkin pasty. (Rowling 101)

Pumpkin Pasties were Harry’s first taste of the Wizarding World.  Will they be yours, too? 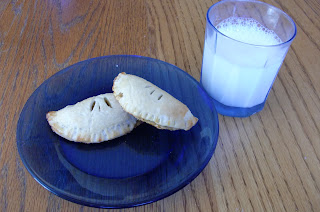 Add all ingredients except for the pie crust into a mixing bowl.  Beat the filling ingredients together until consistent.  Bake the pie filling in a large casserole dish in hot oven (425 degrees) for 15 minutes. Keep oven door closed and reduce temp to moderate (350 degrees F/180 degrees Celsius) and continue baking for 45 minutes or until table knife inserted in center of dish comes out clean. Cool on wire rack.
Make or purchase pie crust pastry. Roll thin on lightly floured wax paper and cut into circles approx 4" in diameter. Put a spoonful of the cool pumpkin mixture towards one side of the center of the circle. Fold over the crust into a half-circle and firmly crimp the edges closed (This is sort of a pain.  Be prepared for a mess). Slice three small slits in the top for venting and place on a well-greased cookie sheet.  (I also coated some of them with my leftover egg wash from the treacle tart and then sprinkled some sugar on the top).  Bake at 400 F only until crust is a light golden-brown (about 15 minutes). Serve at room temperature so you don’t have to worry about people burning their mouths.

And here are Barrett and Brandon enjoying them as well.  Brandon is faceless in this picture, but he enjoyed them! 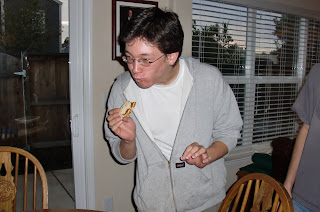 Okay, I've got to go watch the movie! *squeals with excitement*  Cheers, mates!
Posted by Mary J. Locke at 4:52 PM

I love this post for so many reasons! One of them being that Brandon and Barrett are in it! I miss you guys a lot, I wish I was there!
Also...Pumpkin Pasties look SO good!!