My name is Mary, and I am a Harry Potter addict. 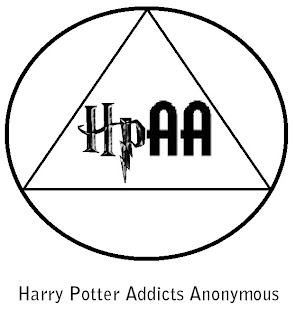 I am one of the millions of kids who discovered their love of reading during Harry, Ron and Hermione's adventures at Hogwarts.  From the time I was 10 years old, Harry held my heart and ruled my life.  You may think I sound dramatic, but ask my close friends and family.  It's 100% true.  I have read each book at least 4 times, and I think I've read Goblet of Fire and Order of the Phoenix closer to 13 times.  I wrote 93,000 words (the equivalent of a fairly large novel) of fan fiction in the Harry Potter universe when I was 16. I own 3 copies of Deathly Hallows: 1 American, 1 Spanish, and 1 British (the latter for which I waited in line in Oxford, England for 5 hours, in the rain, instead of going to Wales with the rest of my classmates).  I wrote a college term paper comparing Harry Potter to Shakespeare, just so I could read the books and still technically be studying.  I'm cool like that.

I also know there are a ton of people out there just like me, if not more slavishly devoted.  Julie is a huge fan, for sure.  Which is why we decided to have a Harry Potter food week to celebrate the Harry Potter and the Deathly Hallows: Part 1 movie coming out on November 19!!  YAY!!!  I'm excited.  You'll be excited too as soon as you watch this wicked awesome Deathly Hallows trailer.

There are lots of Harry Potter recipes that us Americans don't have any experience with. They could be recipes that J.K. Rowling made up, such as cockroach clusters, fizzing whizbees, and the rest of the Honeyduke's collection, or they could simply be British recipes that no one makes around here, such as steak and kidney pie and treacle tart (Harry's favorite dessert).  We want to try them all, but neither of us have the time or money for all that.  Sad, right?  Do you feel like you'll never be cheerful again? Quick, look over your shoulder to see if there are any dementors around.

We need your input!  Below is a poll with 7 choices (you fellow HP nerds know the significance of the #7).  Even if you are anti-all-things-Potter, you can still vote!

It's as easy as a flick of your wand.  The poll closes on Sunday, November 14 at 11:00 p.m. Pacific Daylight Time.  We will make the top 3 choices.  But I am also open for other suggestions!  Leave a comment on this post if there is an HP recipe you have always been curious about that is not on the poll.  If we can't fit it in this week, we'll do it for the Deathly Hallows Part 2 opening in July.

Okay, that's all.  I'll go hang out with Roonil Waslib and ooze nerdiness elsewhere.  Cheers, mates!
Update:  Here are the foods we cooked for our first Harry Potter Food Week.
Update on June 28, 2011: Check out our Harry Potter Food Week 2!  Recipes will be posted during the first two weeks of July, before the Deathly Hallows: Part 2 premiere on July 15th, 2011.
Posted by Mary J. Locke at 1:17 AM