I would also like to add my two cents about my love for Harry Potter.

Harry Potter was what got me back into loving to read. When I lived in California, I was kind of a book worm. Then I moved to Wisconsin and it wasn't cool and there was no book club for 3rd graders. I kind of neglected reading a little more after I moved. Then I read Harry Potter in 5th grade and fell in love with reading again. The longer the books got, the shorter amount of time it took me to read. I read the 6th book for the first time in a day and a half. They are literally such good books that I didn't care if I didn't sleep or eat, I just wanted to read.
I've also been a really big fan of the movies. I can recite the first one (although, I haven't done it in a while so...who knows). For the most part, I really love the movies. Especially Daniel Radcliffe, because...let's get real...he's smokin' hot! I'm super excited because I have my ticket to see the next movie at the midnight premiere! I figured I can splurge on the ticket since I will be on mission when the very last movie comes out. Harry Potter is the best!!! I mean....Potter Puppet Pals, anyone?
http://www.youtube.com/watch?v=Tx1XIm6q4r4

Oh, and did you catch Glee this week? You know Blaine, the super hot guy at the all boys school who sang "Teenage Dream"? 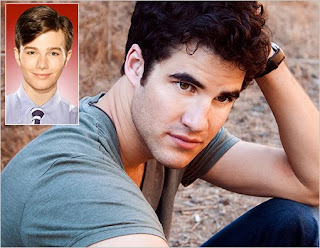 You can ignore Chris Colfer in the corner, this isn't about him. Though I love that guy!

ANYWAY: Darren Criss played Harry Potter in a fan written production at University of Michigan called A Very Potter Musical. It was a Youtube sensation, and it led to a sequel. I HIGHLY suggest watching both of them...they are hilarious and amazing in so many ways. I believe Darren Criss wrote a lot of the music for it too. Hot.
http://www.youtube.com/watch?v=wmwM_AKeMCk

I'm super excited to do some Harry Potter themed cooking! I made a version of butterbeer in April of this year but I don't remember the recipe and it was kind of chocolatey...which was odd.
Posted by Julie M at 9:32 PM

I LOVE AVPM! And yes, Darren Criss is awesome.