My dad recommended a book to me about a year ago.  He said it was about woman in Botswana who runs a private detective agency.  That was enough to get me hooked.
The No. 1 Ladies Detective Agency, by Alexander McCall Smith, is the first in a 12 book series (and still going - #12 came out this year) that has been highly successful.  It has entertaining characters, and is a wonderful slice of life in Botswana.  It’s unique and human, strange and yet so relatable.  It’s the sort of book you can set down for a year and pick up in the middle and immediately enjoy again.  I think the best word to describe it is “charming.”
Plus I liked it because it was written by a Brit (Scotsman, to be specific).  What can I say?  I love all things British.
The cool thing about the series is that it tells so much about African life.  I knew nothing about Botswana before I started reading, and now I know lots about their traditions and attitudes and the food they eat.
That’s right.  It all comes back to the food.
If you have read any of the Precious Ramotswe (the main character in the series) books, you can probably guess what two foods I tried.
1)      Bush Tea
2)      Pumpkin 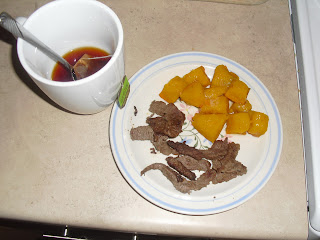 McCall Smith constantly talks about bush tea throughout the series, because it’s pretty much Mma Ramotswe’s favorite thing in the world.  I always thought it was entertaining, because it combined the very British ideals of constantly drinking tea with the African plant, which comes from the Bush.  And by Bush I don’t mean a shrubbery. Or the U.S. president. I mean the wilderness.  Specifically the hot, dry desert of southern Africa where only the Bushmen live. If you haven’t seen this movie (The Gods Must Be Crazy), go watch it right now!  Slapstick/cultural clash comedy at its finest.
I assumed I wouldn’t be able to try bush tea, because I don’t drink tea unless it’s herbal tea for religious reasons.  (If you want to know about the Word of Wisdom and why Mormon’s don’t drink tea, click here.)  But it turns out that bush tea is an herbal tea!  That means it’s 100% natural, caffeine free, and therefore not habit-forming/addictive.  So I got to try it!
Bush Tea, otherwise known as Rooibos or Red Bush Tea is a tea made from the rooibos plant, which grows in southern Africa.  The tea is red in color and has a very mild flavor which children tend to like.  It’s also good for settling stomachs and (supposedly) relieving allergies.
I admit that I don’t usually care for herbal tea unless it’s drowned in sugar and milk/cream.  To me it always tastes like someone plucked some grass or weeds off their lawn and stuck it in a cup of hot water. 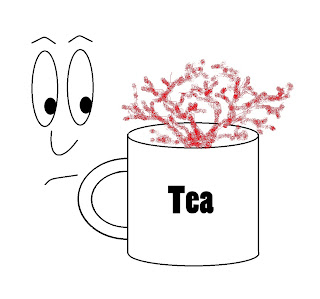 I’d rather drink plain water 95% of the time.  However, I really wanted to try bush tea since it’s such a huge part of the No. 1 Ladies’ Detective Agency books.  So I went to the nearest organic health foods store and bought the cheapest box I could find (it was sold under “Rooibos tea”).  If you want to learn more about preparing tea, check out Julie's post about it from our English Tea Party. 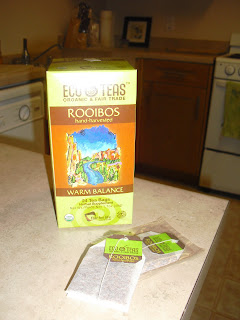 I can honestly say, as one who is normally biased against herbal teas, that I actually liked bush tea! 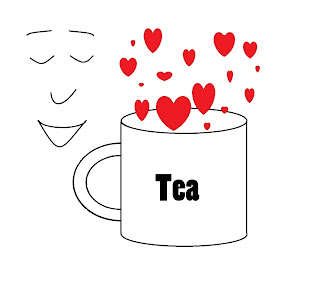 It was very mild in flavor, and definitely a little earthy (what tea isn’t?), but it didn’t taste watery either.  And I normally don’t buy into the whole “tea calms you/settles your stomach” thing, but this stuff had a strange relaxing quality to it.  I’ll have to try it when my stomach feels a little off.
I tried it plain, with a little honey, and with some lemon juice.  I liked it all of those ways, but I think I liked it plain the best.  Crazy, I know.
Okay, as for the pumpkin – Mma Ramotswe’s favorite food is pumpkin.  She often thinks about it, she often shops for it, and when she’s eating dinner there is always pumpkin served.  I really like pumpkin (as I may have indicated in my previous post about the apple pumpkin soup), so I wanted to try it.  The problem was that I didn’t really know if pumpkin in America was the same as pumpkin in Botswana, and I also had absolutely no clue how to prepare it.  I tried googling it, but it seems that most people didn’t really know much about it either.  As I was reading the books I kept searching for clues until finally I came across something in book #8, The Good Husband of Zebra Drive:

“[Mr J.L.B. Matekoni] and Mm Ramotswe were sitting at the kitchen table in thir house on Zebra Drive.  Behind them, on the stove, a pan of chopped pumpkin was on the boil, filling the air with that familiar chalky smell of the yellow pumpkin flesh.  Inside the oven a small leg of lamb was slowly roasting; it would be a good meal, when it was eventually served in half and hour or so.” (McCall Smith 88)

This clued me in on lots of things: 1) the pumpkin is boiled, 2) it’s supposed to smell chalky, 3) it’s meant to be served with oven-roasted meat (which is mentioned in another book as well), and 4) it's cooked for at least half an hour.  That was something to go on, at least.
Method for Pumpkin
I got a small pie pumpkin, cut it in half, scooped out the stringy pulp and seeds (used a melon baller -- it worked wonders), and then chopped 1 half into chunks.  I then tossed those chunks into boiling water and let them cook about a half an hour, until they were tender (and they indeed smelled chalky).  Then I drained them and let them cool.
Meanwhile I chopped up some beef strips, which I soaked in a little vinegar to tenderize (I’m too cheap to buy the tender meat), and then fried the strips in butter, along with some salt, pepper, and garlic powder, just until the outsides of the strips were browned.  Then I tossed the strips in the oven (at 350 F) with the pumpkin chunks to finish cooking and allow the pumpkin to get a little bit of a “roasted” flavor.  I pulled it out of the oven about 10 minutes later and served it with butter on top of the pumpkin. 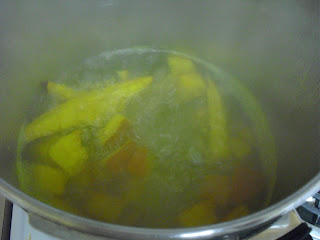 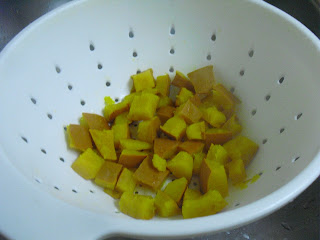 Is this the way it’s cooked in Botswana?  I don’t know.  I did my best.
Is the pumpkin good/worth the effort?  Not really.  Perhaps it’s because my pumpkin was not as fresh (I got it at Walmart and waited about a month before I actually cooked it), or perhaps it’s because American pumpkins are not the same as Batswana pumpkins, but the boiled pumpkin was less than stellar.  The butter helped, but I think I should have boiled it with some salt, because it was pretty flavorless.  I only at a few chunks, and then mashed the rest to use in Pull-ApartCinnamon Sugar Pumpkin Bread and some more Apple Pumpkin Soup.
I washed it all down with some bush tea, though, which made it better.  And the meat was good.
The Verdict: Bush tea is delicious.  Boiled pumpkin... not so much.  But it was worth a try.  Now I can better visualize the two No. 1 Ladies Detective Agency staples as I get caught up in the series (I’m on book 9, The Miracle at Speedy Motors).
If you’re in the mood for a light read full of charm and insight into a new culture, as well as some gems of wisdom, try out The No. 1 Ladies Detective Agency.  It’s the perfect kind of book to curl up on the couch with while enjoying a steaming cup of bush tea.
Posted by Mary J. Locke at 11:01 AM

There must be more to the pumpkin thing. There's a South African store here in San Diego that I've always wanted to go check out. I bet they could clear up the mystery.

Well let me just say upfront: thanks for the butt shot.
Also, I'm with you on tea. Bush tea always sounded like a bunch of dried out desert plants soaked in water, but I guess I'll have to try it someday since you liked it.
Pumpkin definitely needs lots of additives.
I finished NO.1 just the other day. Matt is reading your Diary of a Wimpy Kid, and I might have to read the 451 one, and THEN you can have them.

Here is a complete recipe for Botswana Pumpkin
http://myburntorange.wordpress.com/2012/06/01/botswana-pumpkin-recipe-video/

I found i liked red bush tea after reading #1 LDA books. I was wondering about growing the plant, but after doing some research, I found that the plant is very limited in range and sensitive to change in climate and soil. It grows only in one area of South Africa, so not much chance of growing it in Hawaii.

I am glad to see I am not the only one to want to try bush tea after reading so much about it in the McCall Smith series. Just now I became excited to discover it is none other than the rooibos we received for Christmas. I love its flavor!