Please enjoy The Christmas Song while you read this post:


Because of this song, which I thought was called “Chestnuts Roasting” until a couple years ago due to the opening line, I always wondered what roasted chestnuts tasted like.
Here in California, chestnuts are very rare and very expensive ($7.99/lb!).  My mom never bought them for that reason.  I grew up thinking that buckeye nuts, which are native to the NorCal foothills, were the same as chestnuts, because their shells look pretty similar.  The only differences are that buckeye nuts are a lot bigger and, unfortunately, poisonous. 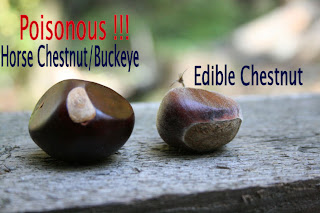 Anyway, the point is, I was clueless in the chestnut department, so I felt I had to try them.
As I was reading up on how to roast chestnuts (and getting sad that people didn’t actually roast them over an open fire as the song indicates), I heard people mention how sweet the chestnuts were, and how divine they smelled while they were in the oven.  Reviews on recipes gushed about how it wasn’t the Christmas season without chestnuts, and yada yada yada.
So this is where I get to be the stuck-up westerner who disagrees. Stuck up, not stickup!  And not that kind of westerner!


First off, yes, roasted chestnuts are sweet.  Barely.  Like a sweet potato is sweet.  In fact, that’s the best description for both their flavor and texture.  They’re starchy and heavy like a sweet potato, with that pleasant but subtle sweet flavor.  Only you’re eating it plain, with no butter or sugar added.  Try taking a bite out of a plain baked sweet potato – it’s not bad, but not all that exciting either. Maybe California chestnuts are just defective, but I doubt it. If there's one thing California is good at, it's growing good produce.
And maybe it’s because I wasn’t cooking very many, but I could barely smell them while they were in the oven.  Just a faint woody odor.  So that was a bit of a let down after all the reviews lauding the sweet chestnut aroma filling the whole house.
Lastly, they’re kind of a lot of effort for such a little treat.  It wasn’t a big deal for me, because I only made four, but if you made over ten (and sometimes people make like 50!), it would be a gigantic pain, particularly since you only have a certain amount of time to peel the shells off before they cool and become impossible to work with.
With that being said, roasted chestnuts aren’t bad.  They taste soft and sweet while they’re warm and they are fairly simple to roast.  I’m glad I decided to make them, because I learned something new and now relate better to “The Christmas Song.”  I would even go so far as to recommend that those who have never eaten a roasted chestnut try them.  Just don’t expect too much, and you’ll be perfectly satisfied.
And now, without further ado, here’s how you roast chestnuts (source: Kathy Maister at StartCooking.com):
Roasted Chestnuts
Ingredients:
-Chestnuts
-Salt (1 tsp for every 4 chestnuts)
Make sure your chestnuts are healthy-looking before purchasing (no holes or mold, not squishy).
Oven temperature: 425 degrees Fahrenheit
1. Using a small, sharp knife, cut large Xs on the top of each chestnut (the flat side is the bottom) through the thick brown shells.
*This step is important!  It lets out the steam as the chestnuts cook.  Otherwise they will explode as they bake.  It also makes them easier to peel.
2. Put salt in a bowl or pot (depending on how many chestnuts you’re using), fill with enough water to dissolve the salt and submerge the chestnuts.  Add the chestnuts to the water, Xs face down, and let them soak for at least 1 hour.
3. Remove the chestnuts from the water and dab them dry.  Place them on a cookie sheet flat side down and put them in a preheated oven.  Bake for 20-30 minutes, or until the brown shell peels back and the nut becomes a light golden brown.  Do not overcook them, or they get chewy and gross.
4. To peel, wait until they are just barely cool enough to touch (be careful!) and then start pulling the shells off.  Don’t wait too long, though, because once they cool, they get much more difficult to peel.
~~ I actually didn’t wait at all – I picked each nut up with a hot pad and used my knife to break away the shell.  It was really easy that way, and I didn’t risk burning my fingers.
When they’re peeled, pop ‘em into your mouth!  They’re great warm!
Apparently there are street vendors in New York who sell boiled chestnuts that are really good.  According to a comment made by Anthony P. on StartCooking.com’s “How to Roast Chestnuts” page,


“The secret is to cut the X on the chestnuts, then boil them (in unsalted water) for about 15-20 min. Drain and let them cool.  That’s it you’re done.  If you like you can broil them for a few min to give them the ‘roasted look’ like the vendors do.”

Maybe someday I’ll try that, because apparently they’re juicier that way (so they would taste less like a potato).  I might consider roasting them with cinnamon, too.  For this year, though, I’m fine without any more chestnuts.  I'll just stick with my caramels and Austrian nut bars this Christmas.

What is your favorite Christmas treat?
Posted by Mary J. Locke at 9:05 PM

perfect! Love it!! Yay! And you are a dork but the stuck up Western comment made me laugh :D

They look like a pain to peel, and that's a lot of calories for something that tastes like a potato, which is low-calorie. I have, however, always been curious about them, so thanks for doing the work for me.

There's a much, much simpler way to cook and eat chestnuts. Some kind person posted a how-to video here: https://www.youtube.com/watch?v=TbT3RnP9fLA

They're also great in recipes: Thanksgiving stuffing, or with brussels-sprouts and bacon ...