“No one wants to eat Chinese food on the Fourth of July, I say.  We’re in apple-pie America and my parents are cooking chow mein!” -Janet Wong, Apple Pie 4th of July

I ran into this cute little children’s picture book while I was browsing for blog ideas online, called Apple Pie 4th of July.  It’s about a girl whose parents are Chinese immigrants.  They own a little store in America, and on the 4th of July they cook chow mein and egg rolls to sell to their customers.  The girl is afraid that her parents aren’t trying to fit in with American culture, insisting that Americans like to eat apple pie on Independence Day.  It’s a cute little story and it brings up a whole different idea of patriotism.
I was thinking about American culture, and how, even though I love apple pie, I love chow mein a whole lot more.  My favorite types of food are 1) Italian, 2) Chinese, and 3) Mexican.  My ancestry doesn’t come from any one of these cultures, but I’m glad other people share them with people like me (even if they are very Americanized versions).  America has always been a melting pot of many different cultures, which I personally think makes it awesome.  We get to learn about each others’ origins and try a lot of delicious food, like chow mein.
I’ve always wanted to make homemade chow mein.  I waited because for some reason I was under the impression that you had to buy special Chinese noodles.  False!  I discovered that you can substitute those fancy Chinese noodles for a more common noodle of the orient: ramen.
I looked at a bunch of online lo/chow mein recipes with ramen and then created my own recipe based on what vegetables and spices I had stocked in my kitchen.  It’s just one of those dishes that you can vary based on your taste preferences and supplies, and it’s very easy to make.  So keep in mind that the ingredients I use don’t have to perfectly match the ingredients in your pantry.  Work with what you’ve got!
Chow Mein
Servings: 2
Cook time: about 30 min. 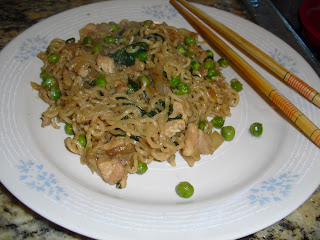 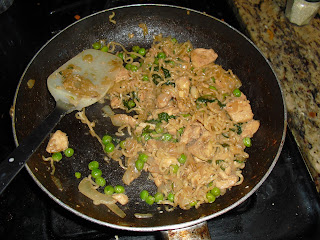 The nice thing about this recipe is that it’s all in one pan.  Minimal dishes!
Variation ideas:
Sweet: add a tbsp of teriyaki sauce and/or 1-2 tbsp sugar with the soy sauce and onions.
Spicy: use at least 1 tsp of chili powder, replace vegetable oil with chili oil, and/or add lots more fresh garlic.  You can also use fresh ginger, chilies, and peppers.
Vegetable variations: bamboo shoots, water chestnuts, mushrooms, cabbage, carrots, green onions, broccoli, bell peppers, etc.
Tender chicken: Marinate chicken with the sauces and spices + tsp of rice vinegar for at least 15 minutes before cooking.
Low sodium: reduce soy sauce to 1 tbsp and then add 2 tbsp water
Low fat: Don’t use any oil at all.  Remove from heat after adding the rest of the garlic. Unfortunately the noodles have an unavoidable 14 grams of fat in each package.
Other recipes online:
http://allrecipes.com//Recipe/chicken-lo-mein/Detail.aspx
http://allrecipes.com//Recipe/chicken-lo-mein-2/Detail.aspx
http://www.suite101.com/article.cfm/whats_for_dinner/81091
http://www.ehow.com/how_4533063_cheap-delicious-ramen-lo-mein.html
By the way, have you ever wanted to know the difference between lo mein and chow mein?  You can read about it here.  Apparently chow mein is fried longer, making the noodles a little crispier than lo mein.

Apple pie isn't in my top 5 favorite pies... maybe not even top 10. I like vegetable chow mein that isn't greasy, which is basically impossible. I buy the noodles from Wal-mart, they're not too expensive, comparatively.