It’s been a little while.  I’ve been busy with Christmas celebrations, hanging out with friends, and going on trips up to the snowy Sierra Nevada Mountains (in California, not Spain).  But now it’s a new year, and I have renewed determination to keep this blog up.
Today I have a very simple, cheap recipe.  My eight year old niece could easily do it.  But it is a pretty unique food for us Americans.  I came across it as I was writing my children’s novel, The Genie Maker, in November.  It is called an Elena Ruz, named after a 1930s Cuban debutante who would go to a late-night restaurant and order this peculiar meal.  Since I discovered the dish via my story, I figured I’d let my novel introduce it. This is the first anyone has ever seen of my novel, so feel honored! Just please keep in mind that it is still a rough scene, and definitely not the most exciting part of the story.
Background: Bryce (the main character) is the new kid at a Colorado middle school and Felix (a boy who emigrated from Cuba a few years previously) is kind enough to sit next to him at lunch.
“What’s that?” Bryce asked, pointing to Felix’s sandwich.
Felix laughed.  “That’s an Elena Ruz,” he said, picking it up.
“A what?”
“Elena Ruz.  It’s a sandwich they make a lot in Havana.  It’s homemade bread with cream cheese, strawberry jam, and turkey.”
Bryce wrinkled his nose.  “Strawberry jam and turkey?”
“Yeah, it sounds weird, but it’s really good.  You want to try it?”  Felix opened the plastic bag and tore off a small piece for Bryce to try.  “My mom thinks I’m going to forget my Cuban roots if I live here too long, so she is always trying to make me take Cuba with me to school.”
Bryce took the little piece of sandwich gingerly.  It looked pretty weird.  But it was only a small piece, and he felt like his chance at a friend would vanish if he didn’t try it, so Bryce decided to go for it.  He had his small carton of chocolate milk if it was too disgusting.
He popped the little piece of sandwich into his mouth and started chewing.  At first all he could taste was the bread, which had rather hard crust but tasted about the same as French bread.  The mixture of sweet jam and cream cheese was good, which Bryce expected since he and Ellie often had that on their toast in the morning.  Surprisingly, though, the turkey blended in well, and he found himself wishing that Felix had given him more than just a small bite.
“You like it?” Felix said, watching Bryce’s face carefully.
Bryce nodded and swallowed.  “Wow.  That was actually really good.  Way better than my lunch.”
They both looked down at Bryce’s chalky mashed potatoes and small brown lump that must have been what the cafeteria menu described as Salisbury steak. They both looked up again with wrinkled noses.
“I’ll tell you what,” said Felix.  “You give me that chocolate milk, and I’ll let you have the rest of my sandwich.”
Bryce glanced at his chocolate milk, his prized lunch accessory, and then back at Felix’s sandwich.  His mouth immediately started to water.  “Deal,” he said.
The sandwich doesn’t really need a recipe, but here it is:
Elena Ruz (Cuban Turkey Sandwich)
2 slices French bread
Strawberry jam
Cream cheese
Turkey
Spread the cream cheese and jam on the bread, put turkey on top, put sandwich together and enjoy! 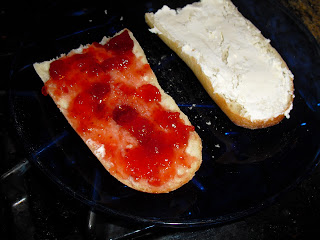 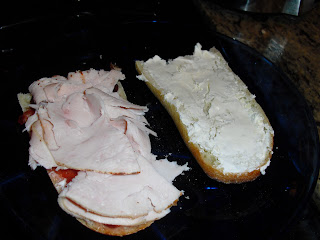 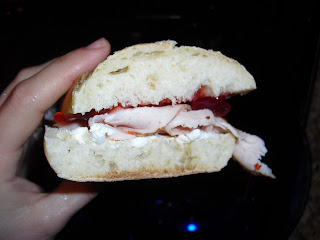 I mixed up a little chocolate milk to go with it, just to top it off nicely.

You can make traditional Cuban bread (pan cubano) instead of French bread, if you want it to be completely authentic.  I didn’t think the hours of work were worth the effort for a sandwich, so I didn’t bother.  You can find a pan cubano recipe here.
I used packaged turkey sandwich meat, and it was good, but I think it would be even better with leftover turkey slices from Thanksgiving or Christmas.  Keep this sandwich in mind the next time you have more turkey leftovers than you know what to do with.
By the way, I wrote Bryce’s description of the sandwich flavors long before I tried it.  But I think Bryce (or me, rather), got it perfectly right.  The Elena Ruz is an easy and surprisingly yummy sandwich.  I definitely recommend that you try it.
Posted by Mary J. Locke at 9:54 PM

I liked the story, but that sandwich would just be so much better with cranberry sauce instead of strawberry jam, which is best on butter croissants.