Last night I got a pretty exciting email.  It went like this:


I stared at the email for a moment with a grin on my face, hardly able to believe it.  When reality sank in, I shouted down the stairs to my mom that I got into grad school and did a little (thankfully private) dance on the landing.  Then I sat back and I tried to figure out what to do now that my year-long hiatus from school was now over.  After much deliberation, I decided to make a fried egg.
This may seem like a pretty random way to celebrate entrance into a higher institute of learning.  Which is true, it was pretty random.  But it was poetic, in a way.  How, you may ask?  Well sit on the rainbow carpet, children, because it’s story time.
Once upon a time there was a little girl named Mary.  Her favorite pastimes were climbing trees, jumping on the trampoline, and blaming her brothers for things they may or may not have done.  One day, Mary’s mother decided that Mary ought to add another pastime to the list.  So she tried to teach Mary how to read.  She would sit her daughter down with a series of flash cards with words like “bat,” “cat” and “sat” on them, and make Mary read them.
This was not Mary’s idea of fun.  She wanted to be outside getting dirty, not sitting on a stool staring at boring flashcards.  So Mary refused to read and tried to run away.
Mary’s mother said, “But don’t you want to read this story?  It’s called ‘Green Eggs and Ham’ by Dr. Seuss. You like Dr. Seuss.”
“Okay, read it to me,” said Mary excitedly, plopping back down on the stool.  She was not the most polite child in the house.
“No,” said Mary’s mother.  “I won’t read this story to you.  You have to read it.  You have to find out the ending for yourself.”
“No, I don’t want to,” said Mary.  “I’m going to go outside and play.”
As Mary started to leave, her mother tried again.  “But Mary, you’ll really like ‘Green Eggs and Ham.’  I promise.”
“No!” Mary said, impatient to go play Power Rangers with her little brother.  “I don’t want to read it!  I don’t like ‘Green Eggs and Ham’!”
Mary’s mother laughed heartily at Mary’s response, which made Mary feel angry and hurt.  “I don’t like it, Mommy!  I don’t like ‘Green Eggs and Ham’!”
“But you’ve never read it,” said Mary’s mother, still laughing. "Just try it."
“I won't try it!  I don’t like it!” Mary insisted, and she ran out the door.
Mary’s mother tried for many days afterward to get Mary to read the story, always bothering her about it.  Her mother’s constant insistence that Mary try ‘Green Eggs and Ham’ began to wear on Mary, and finally she said “Fine!  I’ll try it!”
So Mary sat down and, with her mother’s help, started to read the book.  At first it was hard, because she didn’t know a lot of words.  But soon the story had her hooked, and she laughed as she read the funny words and looked at the funny pictures.  She liked Sam, especially, and the way he would offer green eggs and ham everywhere he went.
When she got to the end of the book and read, “I do so like green eggs and ham! Thank you! Thank you, Sam-I-am!” she smiled.  Looking up at her mother, she said, “I like ‘Green Eggs and Ham’!  I want to read it again!”
I do so like irony.  And yes, this story is true.  Green Eggs and Ham became the first book I ever read by myself, and I’ve always been partial to it over all other Dr. Seuss books.  Thank goodness for Sam-I-am’s (or Mom-I-am, in this case) persistence.  I would have missed out on a great story, and the beginning of a love for all great stories.
So to celebrate three more years of stories (both reading and writing), I made green eggs and ham.  Well, just the green eggs, actually.  I didn’t have any ham. 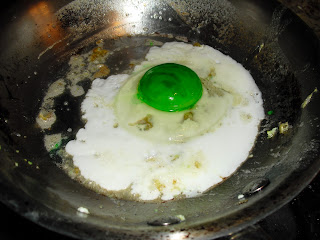 I had been wanting to make green eggs and ham for a while, and I was puzzling over how to do it accurately.  See, the green eggs in the book are fried eggs, and only the yolk is green.    I didn’t know how to pull off just dying the yolks.  I finally got this brilliant idea that I could get a syringe and needle from my dad’s office (he’s a surgeon) and inject green food coloring into the yolk.  Without damaging the sac containing the yolk (a.k.a. the vitelline membrane) so irreparably that the yolk all spilled out.
So I tried the injection thing.  First I withdrew some yolk with the syringe, and then mixed it up with food coloring.  Then I filled up the syringe with the green yolk mixture and prepared to inject it back into the yolk.
But first I had to have a little fun.  If you’re scared of needles, look away! 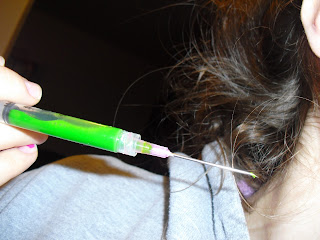 I imagined for a brief moment that I was the Hulk, which was entertaining, and then I moved on with my little experiment. 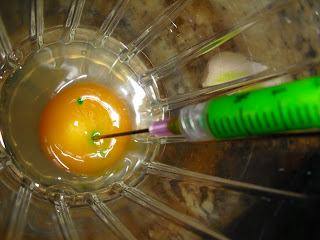 Unfortunately the whole injection thing totally failed.  Egg yolk is too thick.  It jammed up the biggest needle I had, so all I did was create an unexciting vacuum in the tube.  I decided to make that egg scrambled, put away the needles, and try a different tactic.
I separated the yolk from the white and held the yolk carefully in my hand.  Then I dropped a drop of food coloring on the yolk and very gently spread it all over the surface of the yolk.  And it worked! 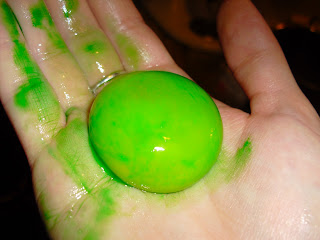 Then I put a tablespoon of butter into a small frying pan and melted it.  I dumped the whites into the pan and then gently coaxed the green yolk from my hand into the pan. 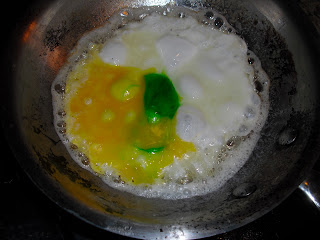 The first time didn’t work out so well.  I think it’s because my hands were dry, so the delicate yolk membrane caught on my hand and ripped.  The second time I made sure there was a little egg white residue on my hand before dumping it in the pan, and it worked! 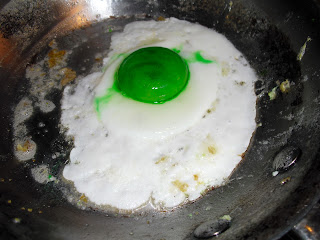 I salted the egg, covered it, and cooked it on low until I could gently prod the yolk and it felt firm (10-15 minutes).  Meanwhile I cooked my green scrambled eggs in another pan and snacked on them while I waited for the fried egg to cook completely (I generally try to avoid runny eggs. Salmonella isn’t worth it).  When it was done, it was delicious!  The food coloring did run a tad, but I still consider it a success.
Yummy tip for frying eggs, green or otherwise: if you’re a bacon lover (like pretty much everyone but me), cook your bacon and then fry your eggs in the bacon grease.  That way the eggs cook quickly and have great flavor.  I like cooking my eggs that way, and I don’t even like bacon.
If you are revolted by the idea of saturating your breakfast in grease (from bacon or butter), fried eggs are not for you.  I would recommend fish instead.  "One Fish Two Fish Red Fish Blue Fish" is pretty good.
Posted by Mary J. Locke at 1:34 PM

i have been trying to find out how to make legitimate green eggs and have only found the easy scrambled way. thanks to your determination i have a nifty trick to learn! hooray for internet!

I used your method, but just kept the yolk in the shell after separating the egg white into the pan. I then added the dye to the yolk/shell and carefully transferred the yolk from one half to the other until it was coated. Saved my hands from getting green! Works best if there is barely any white still with the yolk.