“Tonight’s the night.  Let’s live it up!  I’ve got my ticket -- let’s all dress up!  Go out and smash it, like Harry Potter.  Jump on your broomstick.  You know you wanna!”
Not quite as cool as the Black Eyed Peas version, but the point is, the Harry Potter and the Deathly Hallows: Part 2 movie opens tonight at midnight!!!  I don’t think reality has quite sunk in for me yet.  I watched DH part 1 last night, though, so I’m getting pumped!  I’ll be munching on my Licorice Wands and sipping Butterbeer while I’m standing in line.  It’s going to be AWESOME!
Today is my last Harry Potter post to this blog.  After this, HP haters can stop rolling their eyes at me, and HP lovers will have to look to other sources for various wizarding world treats.  It’s a little sad, yes, but we have done quite a lot of Harry Potter food on this blog, and Anna still has another post tomorrow.  Enjoy it while it lasts!
My post today is on Cauldron Cakes.  Cauldron Cakes are a staple treat in the Harry Potter world, much like Pumpkin Pasties.  They are another invention of J.K. Rowling’s imagination, so there’s no set recipe.  I love it when that happens!  It’s so fun to make stuff up!
Cauldron Cakes have their fifteen minutes of fame in Goblet of Fire, while the gang is riding the Hogwarts Express.  “The lunch trolley came rattling along the corridor, and Harry bought a large stack of Cauldron Cakes for them to share” (Rowling 167).  Soon after, Malfoy comes in and causes his usual ruckus, insulting Ron’s family and in general picking a fight.  Hermione chided:

That is the best description Rowling provides for Cauldron Cakes.  From this, we can conclude that they are stackable and squishable.  Oh, and they’re cakes that resemble cauldrons.  Where to go from here?
I don’t live on the east coast anymore, so I haven’t had the chance to go to the Wizarding World of Harry Potter down in Orlando, Florida.  But as I’ve researched the various foods I’ve been cooking, I’ve seen lots of pictures crop up from that amusement park.  One of those pictures was the lollipop sugar quill that I posted – not exactly as accurate as sugar quills would be in the real Hogsmeade.  And while I’m sure they get some things right, in my opinion, they messed up on Cauldron Cakes, too:

I have no idea what those white things are.  Is that suppose to be smoke?
While these things look delicious, they don’t look like they are very stackable.  The handle gets in the way, and the frosting on the cake doesn’t look like it would withstand much.  Maybe I’m just a total Harry Potter snob (I can hear you guys snorting: “Maybe, Mary?”), but I wanted my Cauldron Cakes to be as loyal to the books as possible.  And seeing as there’s so little description, it just doesn’t seem that difficult to do.
My inspiration for the Cauldron Cakes came from zebra cakes produced by Little Debbie.

I know, it’s sad to be inspired by Little Debbie, but when I pictured Cauldron Cakes, I pictured something like a zebra cake: soft cake covered in chocolate (or white chocolate in the zebra cake’s case), and filled with sweet cream.   Zebra cakes are definitely both stackable and squishable, so all that’s left is to make them look like cauldrons.  I didn’t do my Cauldron Cakes just like the Little Debbie treat, but I mine did have those characteristics.  Well, they may not be a very balanced stack, but they are stackable.
These cauldron cakes are a fairly big production.  Although it’s all pretty easy, it’s time consuming and takes up a lot of space.  Don’t undertake this project unless you have several hours to work on it!
Cauldron Cakes Cupcakes:
1 chocolate cake mix
Other ingredients as listed on the box (most likely eggs, water, and butter)
Mix up cake according to package instructions.  Grease cupcake pans thoroughly and pour cake batter into pans.  Bake cupcakes according to package instructions.
By the way, cake is pretty much the only thing I’ll use a mix for.  I love homemade cake, but those butter recipe cake mixes are pretty darn good, and so easy.
When the cupcakes have been removed from the oven and cooled completely, you have two options.  You can make the cakes more rounded, or you can allow them to retain their cupcake shape.
If you want them to retain their cupcake shape, all you have to do is cut a hole out of each cupcake.  I did so like this: 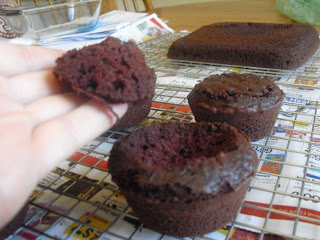 And then you can cut out more of the cake if you’d like, depending on how much filling you want to be in the cake.  Make sure to keep the tops of your cupcakes with their matching bottom – you will use them later.
If you would like rounded cakes, you have to stack two cupcakes like a sandwich, so that the wider parts are in the middle.  You’ll notice, however, that they don’t really stack very well.  You have to level them.  Taking a serrated knife, gently level the cupcakes by shaving off the rounded tops.  Use the line around the cakes from the rim of the pan as a guide for where to cut. 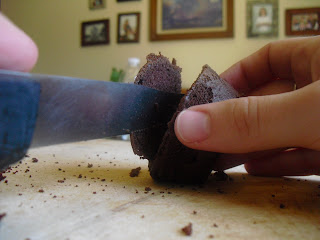 Once you have leveled your cupcakes and sandwiched them, you can then take the top halves of each sandwich and cut a hole in the middle, so that it looks something like a doughnut. 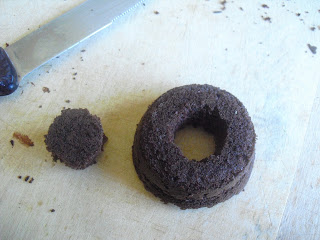 Be careful to keep the “doughnut hole” center with the cupcake it was cut out of.  You’re going to use it later.
Next, you need to fill the cupcake with filling.
Filling:
1/4 cup butter
1/4 cup shortening
2 cups confectioners' sugar
1 pinch salt
3 tablespoons milk
1 teaspoon vanilla extract
A few drops almond extract
Food coloring (optional).
In a large bowl, beat butter and shortening together until smooth. Blend in confectioners' sugar and pinch of salt. Gradually beat in milk, as well as the vanilla and almond extracts.  Add food coloring, if desired (I dyed half of it purple, half yellow).  Beat until light and fluffy.  It will have the consistency (and color, if you didn't dye it) of homemade whipped cream.
Filling the Cakes:
Using a pastry bag, full the cupcakes until they are about 2/3 of the way from the top of the hole. Be careful not to overflow your cupcake with filling – scoop some out with a spoon if you have to much.  Also, be very gentle when filling your cupcakes, because the cake will tend to crack under the pressure.  If that happens, you can kind of glue it back together using a little more filling.  For the sandwiched cupcakes, you also need to add filling into the middle of the two cupcakes, to glue them together.
Once you’re done filling the cakes, you can put the tops back on.  You only need the very top of the top, so cut off a thin portion of the tops, and gently push them back into the holes.   They should go down below the outer edge.  Be careful not to push too far and crack the cake wall!  You can snack on the remains of the tops while you do this.  There might even be some leftover filling to dip them in.
Chocolate:
4 of those big Hershey Bars – the biggest ones they sell in a regular grocery store.
1 tbsp shortening
Black food coloring
I used part milk and part special dark chocolate, but you can use whatever % cacao you want.  I broke the bars into pieces and stuck them in a glass bowl on the stove.  While the oven was one for the cupcakes, the chocolate gently melted without risk of burning.  I stirred occasionally.  When it came time to using the chocolate, I heated it up in 10 second intervals and stirred a ton until it was completely melted.  I then mixed in the shortening until melted.  I also dyed my chocolate with a TON of black food coloring.   You don’t have to do that, but I thought that black made the Cauldron Cakes look more cauldron-like.  When the chocolate is complete melted and the desired color, you are ready to coat your Cauldron Cakes.
I bought the Hershey bars because I didn’t want to worry about tempering chocolate.  I found out that if you melt your already tempered chocolate at a low temperature, you don’t have to temper it, and it will harden nicely.  The problem with chocolate chips is they don’t have that nice hard snap when they’re are melted and harden again.  I didn’t want the outer coating of my cauldron cakes to be melty and soft, so I used the Hershey Bars.
Coating the Cakes in Chocolate:
Cover a cookie sheet with wax paper.  Set a cauldron cake on the corner of a spatula and hold the spatula over your chocolate.  Spoon chocolate over Cauldron Cakes, careful not to fill the hole at the top.  Using a rubber spatula or fork, gently coax chocolate-covered cake off the spatula and onto the wax paper.  Be careful not to let it tip over!  Repeat this until all of your cakes are covered (you may need to reheat the chocolate a little bit if it starts to thicken – only do ten second intervals).   The chocolate may be very thick on some cakes, especially around the bottom. You can run your finger gently around each cauldron cake to wipe off some of the excess chocolate.  Put the chocolate on your finger back into the bowl.  When you are finished, place the cookie sheet full of Cauldron Cakes in the freezer. 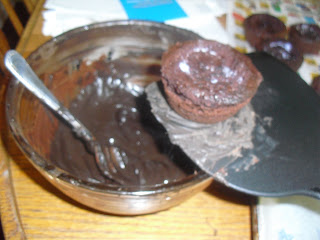 Putting Potion in your Cauldrons:
1 square of vanilla almond bark, of equivalent of white chocolate
1 tsp shortening
Food coloring
Heat almond bark according to package instructions.  When it is completely melted, add desired food coloring (I also dyed this purple).  The almond bark won’t like the dye much and will start to seize up and thicken.  Add the shortening and stir until it is integrated and the almond bark smooths out again .  You can heat it another ten seconds and add more shortening if needed.
Take the Cauldron Cakes out of the freezer.  Using a spoon, carefully dollop small amounts of the almond bark into the dips in the cauldrons.  This will make it look like your cauldrons are filled with potion.  Pop back into the freezer for a few minutes to harden. 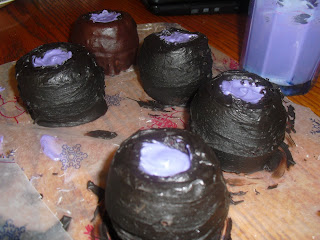 Once it’s hardened, you’re done!  Enjoy your Cauldron Cakes.   They’re deliciously chocolaty, and the touch of almond extract in the filling makes them positively divine.  If you dyed your chocolate black, beware!  Your tongue will be black for hours to come.  :)
I really like the sandwiched cupcakes for their rounded quality, but in hindsight, I wish the opening had been a little bigger.  Next time I will cut off part of the top cupcake, so that the cauldron can have a wider hole.  That was the benefit of the non-sandwiched cupcakes, I suppose.  You can pipe on a rim around the top your cakes with any remaining chocolate, if you’d like.
I hope you all enjoy the final installment of the Harry Potter series!  I know I will!
Posted by Mary J. Locke at 2:00 PM