Hey! It's Anna, back to give you the first of many Harry Potter dessert recipes. Trifle is mentioned in several books. The first time is in Sorcerer's Stone, at the start of term feast.
"A moment later the desserts appeared. Blocks of ice cream in every flavor you could think of, apple pies, treacle tarts, chocolate éclairs and jam doughnuts, trifle, strawberries, Jell-O, rice pudding..." (Rowling 125).
I have a copy of Sorcerer's Stone, like most of you, but in Philosopher's Stone (the British version), instead of Jell-O they say jelly in the UK. The British don't use jam and jelly interchangeably like we do, jam and jelly is jam to them and jelly for them is Jell-O for us. Everything clear as mud now? Good, today we're going to focus on trifle, not Jell-O. I don't know about you guys, but I really like chocolate, so we are going to look at a chocolate trifle recipe.

Ingredients
**Note: You can easily substitute many of these ingredients for something similar, or even add ingredients it doesn't call for like strawberries, get creative! There's already brownies in it, you pretty much can't go wrong! 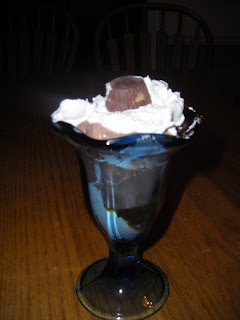 Here's my own personal trifle, I added some caramel in the middle and a peanut butter cup on top. My family loved being able to personalize their own cup, but we're all wishing we weren't out of milk! Enjoy!
Posted by Anna at 4:30 PM

That stuff looks sooooooo good! I'm gonna have to try me some of that!

My family's favorite cake is kind of like trifle: chocolate cake layered with chocolate pudding in the middle, and tons of chocolate whipped cream on top. All homemade, though, 'cause I'm kind of a food snob.