Well, we’re finally at the end of our English tea party adventure.  Sad, isn’t it?
After I raved about the tea scene between Gwendolen and Cecily in my teacakes post, my sisters pointed out to me that the best scene in The Importance of Being Earnest is the muffin scene.  I admit, now that I think about it, that I agree.  And fortunately, that particular muffin scene is very relevant to this final post, since Julie and I definitely made English muffins for our tea party!
Instead of quoting from this scene, you guys have to watch it.  It’s hilarious!  Colin Firth and Rupert Everett are brilliant.  This scene is a continuation of the tea scene between Cecily and Gwendolen, when the women find out neither of their lovers are called Ernest.   You can expand the screen by clicking on the link at the top of the video that says "Colin Firth - Importance..." It will open a new window on the YouTube page.  Watch from 1:03 until 3:10.
Don’t those muffins look delicious?  Here’s how to make them!  I got this recipe from Anna (who will be writing on here next week).  I have no idea where she got it from, but it’s an excellent recipe! 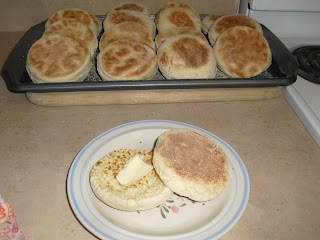 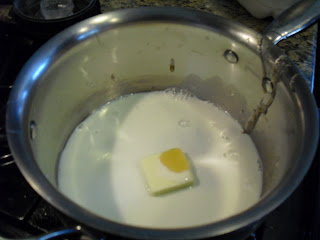 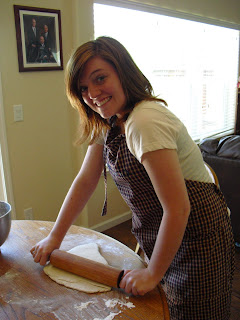 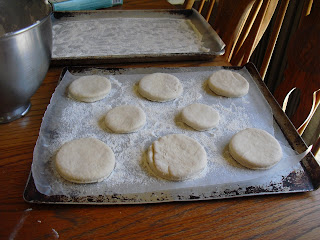 Also, I forgot to post our last butter recipe!  We made raspberry butter (a recipe I also got from Anna), and it was delicious!  I’m pretty sure it was everyone’s favorite spread.
Raspberry Butter
½ cup soft butter
½ cup raspberries, crushed
2 Tbsp. sugar 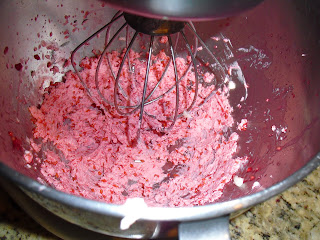 This butter is excellent on the muffins, as were all the other spreads.  It had a light tartness, but was mostly just creamy and sweet.
This concludes our English Tea Party series.  If you would like all of the recipes we cooked in one location, leave a comment below with your email address, and we will email you our full Tea Party Cookbook. 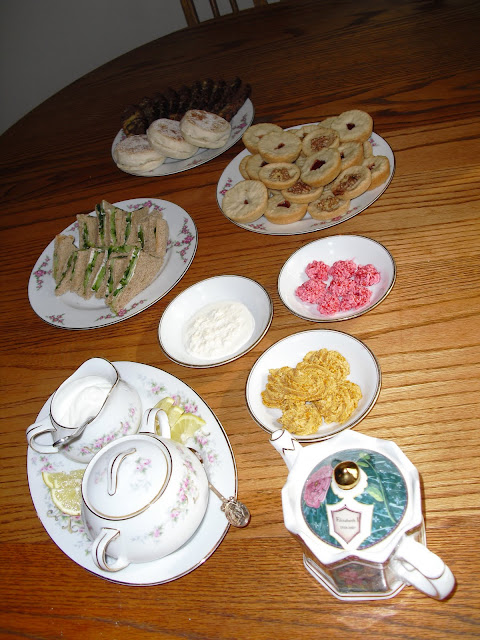 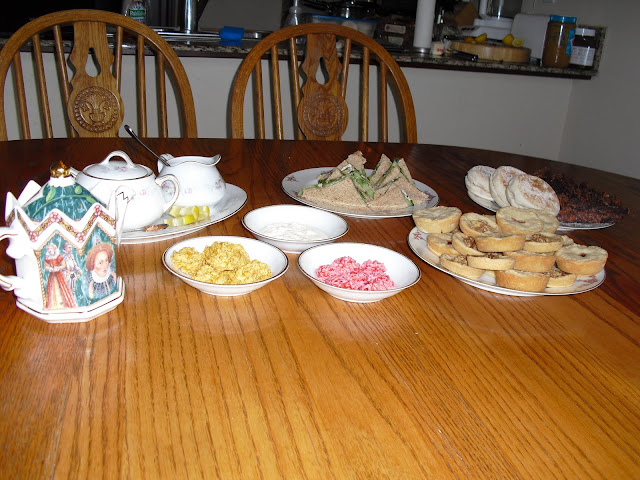 Also, just so you guys know, I totally messed up the order of courses on here.  Julie was leading everything in so well, and then I botched it.  Here is the order in which you should have your teatime treats:
The point is to just have small samplings of everything, and to work your way from lightweight foods to the heavier sweets.
I hope you guys learned as much as we did on our Victorian journey!  It was so much fun.  Seriously, guys, you should throw your own Victorian tea party right now!  Then come back and tell me what your favorite treat was!
P.S.  You know how we've been trying so hard to mimic clotted cream (first with cream cheese, and then by "harvesting underclots."  Ew...), and we're just not quite getting it right?  Julie pointed out to me before she left that they have jars of Devonshire Cream (clotted cream) imported from England at World Market.  So I went and bought some and finally tried it! 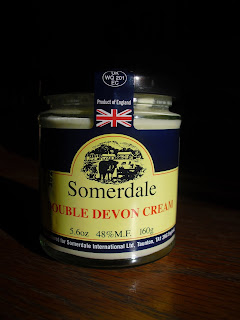 The verdict: It has the flavor of unsalted butter and the texture of thick whipped cream.
For those of you who have tried it in England (or better yet, are native to the UK), does that sound about right?  The one I tried wasn’t fresh, so I’m sure it wasn’t quite the same (it had that after taste of preserved milk), but it’s the closest I can get until I can go to England again (whenever that is...).  Someday, I shall go to Devon and try real clotted cream!  Until then, my sad American substitutes will have to do.
Thanks for reading!  Harry Potter fans, tune in on Tuesday, July 5th, for the start of our Deathly Hallows: Part 2 celebrations! And don't forget to vote on the poll on the left sidebar!  Here's a sneak peek at some of the awesome food we're doing.  Can you guess what we're up to? 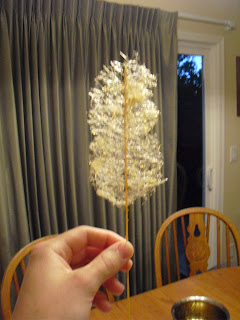 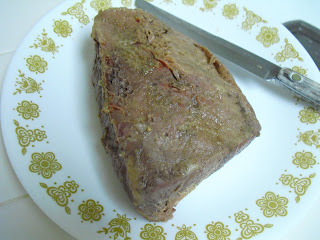 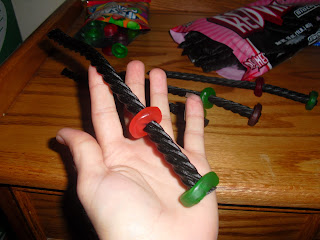 Ok so I have loved reading this blog...just had to let you know..there are several of these recipes that are going on my "to-do" list!!

Gotta say, that clotted cream stuff can stay in England.

The English muffins look just like Thomas'! I've always wanted to make my own, but never have. Yours look perfect.

It seems every British book I've read has cake with tea. What's your input on that?

Rachel, these are just my thoughts, and I don't know how accurate they are for natives to the UK. I went on a bit of a tangent, but you made me think and it was fun to get my thoughts out. So here's why I think British literature often talks about cake with tea:

Food is something we eat regularly, multiple times a day. It becomes part of our daily routine, and it's something we depend on. For instance, at 5:00 p.m. at SVU, I new it was dinner time. On Saturdays, I knew it was breakfast for lunch. Each Friday was pizza or soup day, depending on the weather. It became part of my daily/weekly expectations, a foundation on which to build the rest of my waking hours. Human beings like reliability, and food, for those of us blessed to live in well-off countries and in stable homes, can be relied upon.

I think that in England, tea time is far more than physical nourishment; it is also a mental/emotional renewal, a rest for daily cares that is so widely needed and beloved that it is ground deeply into their culture. At 4:00 p.m. (or thereabouts), it's time for tea. This is a non-negotiable time during the day where you can collect your wits and compose yourself, as well as enjoy a warm beverage. It can be relied upon, like a loyal friend.

Now, as for why the cake in particular, I believe that is a pairing of practicality. Since teatime is usually set for the late afternoon/early evening, that's right around the time people start to get hungry. Tea is basically watery herb juice, and it needs something to compliment it in order to settle the grumbling stomach and really achieve that feeling of respite and recharge before finishing off the day. Cake is a solid enough food to tie you over until dinner, while being light enough to not spoil your dinner, and sweet enough to compliment the tea.

Also, since the British take their tea so seriously (as illustrated by the fact that it's mentioned in so much literature), they have made a point to make teatime the most enjoyable part of the day, not only in terms of relaxation, but also in terms of taste. There are very few English foods that really please the palate. Cake is among the elite in British cuisine and easier to make, and so it finds it's way into teatime regularly.

Writers try to capture life, and since cake with tea is common, the pairing finds its way into British literature. At least, that's why I think it works that way.

English Tea Party! I am just in love with the photos because I am a big foodie and this is why I am feeling so hungry. At some garden themed event venues Chicago I also would be hosting the family gathering in the next month and I would be trying some new recipes that I could include in that bash.