Imagine standing in front of your kitchen stove, prodding some large, rotund sausages in a frying pan.  You are admiring the pleasant sizzling sound and the way your sausages are browning nicely, when BANG!  One of your sausages explodes.
That’s why the British refer to sausages (well, certain kinds of sausages) as “bangers.”  A pretty apt name, if you ask me.  Our typical sausages in the US, unfortunately, don’t bang or explode, because the casing around the meat isn’t sealed – it’s open at the edges.  See? 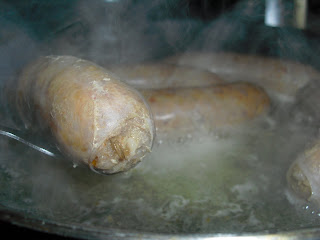 Takes the fun out of life, doesn’t it?  I suppose it takes a lot of kitchen accidents and lawsuits out of life, too, but who cares about that?
“Bangers and mash” is a common meal in the UK.  It consists of fried sausage (not the breakfast kind -- usually plain pork), mashed potatoes, and a beef-based gravy. 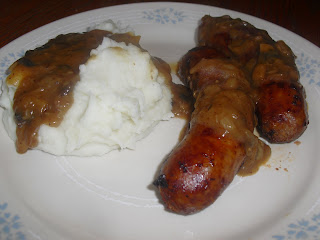 I have always wanted to try bangers and mash.  First of all, I love mashed potatoes.  They were my favorite food when I was a kid.  (Now my favorite food is Cinnamon Toast Crunch.  I’ve matured a lot, eh?)  And I definitely like sausage.  Combine that with some gravy, and you’ve got a superb meal!  So I was delighted when I realized that bangers and mash is mentioned in Harry Potter and the Order of the Phoenix!  Of course, I'm quoting out of the American version, so sadly they changed “bangers” to “sausages,” but it’s the same thing.  After Harry tells Hermione to spread the word that the DA will meet in the Room of Requirement, “Harry [returns] hungrily back to his sausages and mash” (Rowling 388).  I’ll take the excuse to make ‘em!
Bangers and Mash
There are three parts to bangers and mash: sausages, mashed potatoes, and gravy.  Let’s start with the sausage.
Sausage
The sausages I used weren't exactly traditional English bangers.  As mentioned before, they weren't sealed at the ends, so they certainly didn’t bang.  But they also were not plain pork sausages.  The best alternative I could find, that wasn’t breakfast sausage, was mild Italian sausage.  It was as close as I could get, and the sausages actually went really well with the rest of the ensemble.
To fry raw pork sausage, you have to be careful to make sure it’s completely cooked.  There’s this nasty disease called trichinosis.  I’ll let you follow that link if you want to know the gory details, but the point is, you don’t want to get it, so you have to make sure your pork products are cooked.  So what you do is put them in a frying pan, and then fill the pan with water until the sausages are about ¾ of the way covered.  Boil them covered for 20 minutes, then you can either uncover them and allow the water to boil off (takes around 15 minutes) or pour off the water and start frying.  The grease released from the sausages will help in frying the meat just enough to brown it.  Cut a sausage in half to make sure it’s no longer pink, and if it’s nice and brown and the fat’s melted, you’re good! 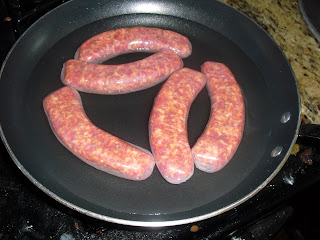 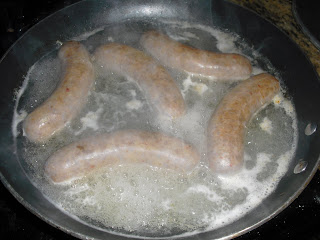 Mashed Potatoes
Next thing to worry about is the potatoes.  Put a pot half-full of water on the stove and bring it to a boil.  Peel as many potatoes as you want (generally a medium potato per person is my rule), and chop them into thin slices so they will cook quickly.  When the water is boiling, dump the potatoes in, with a little salt, and cook them uncovered.  Check them every few minutes with a fork, to see how soft they are.  When a fork slides through the potatoes with ease, they’re done.  Pour off the water.
Now, I know I previously gave you guys a recipe for delicious mashed potatoes, but those potatoes are really flavorful because they’re meant to be eaten without gravy.  These mashed potatoes have gravy to go with them, so they don’t need quite as much pizzazz.  Here’s what I did:
I dumped all of this into the pan I'd boiled the potatoes in (the potatoes were already in there), and used a hand mixer to whip them until they were nice and smooth.  Taste, and add more garlic or salt as needed. 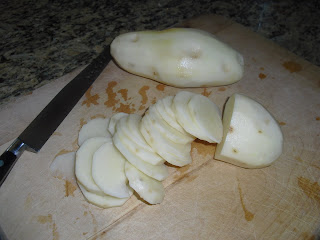 Gravy
For the gravy, I followed this recipe from the Food Network's site (I changed it a bit). It makes a delicious, sweet flavored gravy that doesn’t require beef drippings.  I highly recommend it.
Mushroom and Onion Gravy
Melt butter on medium heat. Add the mushrooms, onion, and thyme and season with salt and freshly ground black pepper, to taste. Cook, stirring rarely, until the mushrooms are slightly browned and soft, about 4 minutes. Sprinkle in the flour and mix until fully incorporated. Stir occasionally, until the flour is lightly toasted, about 3 minutes. Add the sugar water and vinegar and stir, scraping up any browned bits from the bottom of the pan. Slowly pour in the stock and stir until smooth. Let the mixture come to a boil and cook until sauce is reduced and thickened, about 8 minutes.

Taste and add salt and freshly ground black pepper, if needed. Lots of pepper is good in this dish!


And there you have it! Bangers and mash, as close to authentic as I could get without spending a fortune (I’m broke thanks to all these HP recipes – and I’ve been going cheap!).  I highly recommend that you try the gravy, at the very least.  But it’s all delicious and savory.
Posted by Mary J. Locke at 4:05 PM

I really like how informative your posts are. I like British culture, so it is fun. Also, it is a little fun to see mom's pots and pans and kitchen in the background.
This dish looks pretty good. I would make that if I ever bought sausage.