Of all the Harry Potter characters, the one I most identify with is Ron.  We both are the sixth kids out of seven in our family (and therefore both got a lot of hand-me-downs), we have a hatred for homework and a passion for procrastination, we occasionally feel dwarfed by our awesome friends, we are very protective of our youngest siblings, we let our tempers get the better of us, we’re very sarcastic...  Basically, we’re the same person, only he’s a fictional red-headed British boy, and I’m a real-life brunette American girl.  Minor details, though, right?
I love the scene in Harry Potter and the Sorcerer’s Stone where we are first properly introduced to Ron.  This is on the Hogwarts Express, where he and Harry share the same compartment and become fast friends.  There’s a particular moment that makes me laugh, because it reminds me of similar situations that have happened to me many times.  Harry buys a whole bunch of stuff off the food trolley, while Ron awkwardly mumbles that he brought sandwiches.

Ron had taken out a lumpy package and unwrapped it.  There were four sandwiches inside.  He pulled one of them apart and said, “She always forgets I don’t like corned beef.”
“Swap you for one of these,” said Harry, holding up a pasty.  “Go on-“
“You don’t want this, it’s all dry,” said Ron.  “She hasn’t got much time,” he added quickly, “you know, with five of us.”
“Go on, have a pasty,” said Harry, who had never had anything to share before or, indeed, anyone to share it with.  It was a nice feeling, sitting there with Ron, eating their way through all Harry’s pasties, cakes, and candies (the sandwiches lay forgotten). (Rowling 101)

In my family, my mom always made sure to pack our lunches before we went anywhere.  We rarely ever bought anything -- it was just too expensive with so many people to feed.  Even when we went to Disneyland, we would eat PB&J that had been squashed in my mom’s purse for hours instead of splurging a little on a corn dog.  Often I didn’t like whatever she packed, because she couldn’t possibly cater to all seven of our tastes.  So I totally relate to the lumpy package of corned beef sandwiches.
In honor of Ron, I decided to make a corned beef sandwich (called “salt beef” in the UK).  Actually, my grandma offered me one while I was visiting her last weekend, and since I knew that it was mentioned in Sorcerer’s Stone and I’d never tried one, I said “Sure!” and made sure to take pictures as I made it.
Corned Beef Sandwich
Two slices bread
Mustard
1 pkg pre-cooked corned beef
Heat your corned beef according to the package’s instructions.  While it’s heating, spread mustard on both pieces of bread.  Once the meat is heated, slice thin slices of it and lay it out evenly on one of the slices of bread.  Place the other slice of bread on top.  Enjoy. 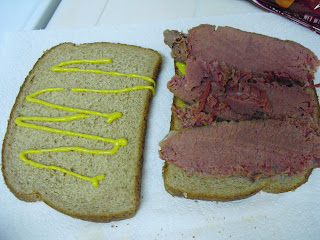 I purposely didn’t put much on my sandwich, because I felt that it would be much more like how it’s mentioned in the book if I kept it simple.  I thought the sandwich was good for the first few bites, but after that it was rather dry (as Ron pointed out).  Corned beef is not my favorite meat, but I don’t mind it, so it wasn’t an unpleasant experience.  I can definitely see how Ron would have preferred the pumpkin pasties, though.
More Harry Potter food coming tomorrow!  Keep an eye out!  Also, one more day on the poll in the left sidebar.  Be sure to vote for the treat you want us to make!
Posted by Mary J. Locke at 11:48 PM

I absolutely love corned beef! But sadly, I haven't had it in years. Jedd doesn't like it.

Sandwich looks very dry. And before you slice the meat it's like a cow pie.