You all tired from staying up to watch the midnight showing Harry Potter? I am, but it was so so worth it! Now that the series is over you are going to need to console yourself with some ice cream! So what better ice cream treat to have than the lavish knickerbocker glory from the first book?

"They ate in the zoo restaurant, and when Dudley had a tantrum because his knickerbocker glory didn't have enough ice cream on top, Uncle Vernon bought him another one and Harry was allowed to finish the first," (Rowling 26).

So the name knickerbocker, is what they used to call the Dutch in New England or you may know it as a type of pants. So the name originated in America, but nobody really knows what's up with the English stealing it for an ice cream sundae.

This is another easy one to make and it's kind of go with the flow like the trifle was.


I adapted this recipe from here. 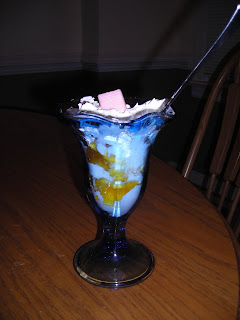 I used fresh peaches and peach Jell-O in the middle of mine, it tastes excellent!

A toast to the Boy Who Lived who helped shape our childhoods, cheers!
Posted by Anna at 7:37 PM