I finally joined the world of YA (Young Adult) action enthusiasts and read The Hunger Games, by Suzanne Collins.  I know, I’m a little slow on the uptake, but in my defense, it was waitlisted at the library 25 times over!  I finally broke down and bought my own copy, trusting that the good reviews would reflect my own opinion of the book.  For the first book, at least, they did.  I won’t get into my severe disappointment with Mockingjay or my annoyance with Collins’ use of the present tense.  But for the first book, at least, I enjoyed it just as much as everyone said I would, which was a lot.

The Hunger Games is an exciting story about a world where North America was blown to bits, and what’s left is a nation called Panem, which consists of 12 Districts for gathering raw materials and a 1984-esque controlling city called the Capitol.  Because of a District rebellion 74 years previously, the Capitol chooses to start up a brutal, sadistic way of keeping the Districts in check, which is the Hunger Games.  I won’t reveal exactly what those are, but it’s definitely worth reading to find out.  It’s an action-packed story with romance, intrigue and a lot of gore (Don’t read it if you have a weak stomach).
Anyway, the main character, Katniss Everdeen, grew up on the brink of starvation in District 12, hunting to survive.  So when she finds herself in front of a meal from the Capitol, she is stunned at the extravagance of the food.  She describes what’s before her:

“Chicken and chunks of oranges cooked in a creamy sauce laid on a bed of pearly white grain, tiny green peas and onions….

“I try to imagine assembling this meal myself back home.  Chickens are too expensive, but I could make do with a wild turkey.  I’d need to shoot a second turkey to trade for an orange.  Goat’s milk would have to substitute for cream.  We can grow peas in the garden.  I’d have to get wild onions from the woods.  I don’t recognize the grain, our own tessera ration cooks down to an unattractive brown mush…. Days of hunting and gathering for this one meal and even then it would be a poor substitution for the Capitol version.”  (Collins 65)

If you are a fan of The Hunger Games, you may be wondering why I didn’t choose to highlight the famous “lamb stew with dried plums” often mentioned in the trilogy.  My answer: too expensive.  Sorry guys, I really want to make it, but lamb is definitely not happening with my budget.
So I chose this interesting creamy orange chicken instead, which I actually had all of the ingredients for (except the orange).  It seemed like a fascinating dish and I loved reading Collins’ description.  Collins invents lots of interesting foods , and we could probably do a whole week of Hunger Games foods, but as yet, that’s not in the works.  Anna might have something for you, though, since she, too, recently read the series.
I invented this recipe.  I basically made a béchamel sauce with some added flavors, mostly orange, and poured it over baked chicken.  I decided that the pearly white grain Collins describes is probably rice, so that’s what I put in the recipe.  I also added a fancy garnish (easy to do) because that seemed like the sort of thing a Capitol chef would do.  This recipe is geared to serve 4 people (each person with their own chicken breast), but when I made this, I made it just for me, so the baking time might not be quite enough for 4 chicken breasts.  I also forgot to cook rice to go with it, in case you’re wondering why it's not in my pictures.
Chicken in Orange Cream Sauce 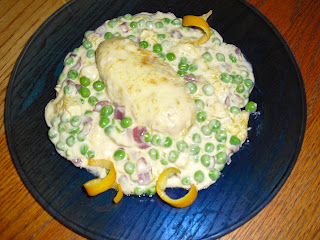 Cream Sauce:
Serves 4
2 tbsp flour
2 tbsp butter
¾ cup cream
1 clove garlic
Dash of pepper
1-2 Tbsp chicken broth
1 orange
½ zested
Same ½ peeled & chopped into bite-sized pieces with as little of the albedo (white layer under skin) as possible
3 tbsp orange juice from other half
Peel from unzested half -- carefully set aside
Put butter and flour in a saucepan over medium heat.  Stir until butter is melted and the mixture creates a thick paste (this is called a roux).  When the roux starts to bubble, add cream ¼ cup at a time, stirring well after each addition.  When the flour mixture is fully integrated into the cream, add pepper, chicken broth , and garlic.  Heat and stir until the sauce is thickened.  Add orange zest, chunks, and juice.  Set aside.
Chicken:
1-4 boneless skinless chicken breasts (bake time is for 1 breast - adjust accordingly)
2 tbsp olive oil
Salt
Pepper
Preheat oven to 400F.  Add olive oil to pan and make sure the pan is well coated.  Place the chicken in the saucepan on medium high heat.  Thinly coat in salt and pepper.  Using tongs, rotate the chicken and press all sides to the pan, allowing the outer part of the chicken breasts to cook (This is called searing).  Don't cook the inside of the chicken!  Just the outside, to seal it in (making for moister chicken when it's baked).  When all sides of the chicken are cooked, place chicken in a baking dish with the residual olive oil and put into oven.  Bake for 15 minutes.  Remove dish from oven and add the cream sauce to the top of the chicken.  Bake for 5 more minutes.  Cut into thickest chicken breast and make sure it is completely cooked.  Continue baking if it is still pink. Once it is completely cooked, place under the broiler for 1 minute more, or until the sauce on top of the chicken is lightly browned and bubbling.  Remove from oven.

Orange Peel Curls (Garnish - Optional):
Orange peel
Bowl of ice water
While you have some down time with the food in the oven, take some of your orange peel that has not been zested.  Using a peeler, peel off as much as you can of the white inside of the peel without damaging the orange exterior.  Then take a knife and cut the peel into long, thin slices.  Curl each long strip of peel around itself into a tight spiral and immerse in the ice water.  Hold the curl in the water for 30 seconds – 1 minute, and then release to do the next curl (keep the curled peel in the water).  When you have the desired amount of orange peel curls, you can remove them from the water to place them on your dish
Bed of Rice:
Serves 4
1/2 cup chopped onion
1 cup cooked peas
2 cups cooked rice
Place the chopped onion in a small saucepan with a thin layer of water (just enough to coat the bottom).  Cook on medium heat until the onion turns clear and soft and the water has cooked off.
On each plate, spread ½ cup of rice, then layer on top of the rice with ¼ cup peas and 2 tbsp onions.  Place the chicken on top of the rice bedding, and add any extra sauce over plate. Garnish with orange peel curls.
This dish is unique and delicious!  I love the way the orange flavor blends with the cream, and the garlic compliments it nicely.  I was worried it would be weird because of the orange/garlic combo, but I loved it!  And it actually was pretty easy and fairly quick.  I would totally make it again.
Posted by Mary J. Locke at 3:38 PM

I thought it sounded weird when I read about it, but I guess if you liked it then it must be okay. Unfortunately, my husband doesn't do peas.

Your chicken dish looks good, but I don't like gore, so I think I'll pass on the book.

Loved the books and your recipe looks great! Michael makes an amazing roux, thanks to his time in France ;)

I've been hungry for this chicken dish since I've read the books. I just did the lamb stew. It's so much fun to be surprisingly food inspired.

MMmm, this looks great. I loved the imagery Collins used in the book. It played with emotions so intensely! Feeling for the starving people in the districts and hating the spoiled feasts of the Capitol. Thanks for sharing this recipe!