This is the week!  Are you ready for five fun-packed days of fabulous foreign foods and favorite (or favourite)... friends of... fffff..... yeah, I ran out of Fs.  But are you ready?!
Alright, so we cooked the top winners on the poll (Results can be found on my Tues, November 9th post), as well as a couple of extra things.  We’ll be posting something everyday.  My post today is on Yorkshire pudding.
We Americans generally think pudding comes in three flavors: chocolate, vanilla, and tapioca.  In England, however, pudding is more often a dinner dish than a dessert (what’s with me and alliterations today?).  I’m sure you have heard of the infamous black/blood pudding.  Things like that sound less than appealing, but it’s fun to try new things.  My adventures with food in England included things like fish and chips, sandwiches, Cornish pasties, roast duck, and lots of chocolate.  No pudding.  So I decided to try some Yorkshire pudding and really get a feel for the following scene in Harry Potter and the Goblet of Fire, during the start of term feast.

“There are house-elves here?” [Hermione] said, staring, horror-struck, at Nearly Headless Nick.  “Here at Hogwarts?”
“Certainly,” said Nearly Headless Nick, looking surprised at her reaction.  “The largest number in any dwelling in Britain, I believe.  Over a hundred.” [...]
Hermione looked down at her hardly-touched plate of food, then put her knife and fork down upon it and pushed it away from her.
“Oh c’mon, ‘Er-my-knee,” said Ron, accidentally spraying Harry with bits of Yorkshire pudding.  “Oops – sorry, ‘Arry –”  He swallowed.  “You won’t get them sick leave by starving yourself!”  (Rowling 181-182)

Naturally, I wondered exactly how disgusting it would be to get bits of half-chewed Yorkshire pudding sprayed on you.  Poor Harry.  First Voldemort kills his parents, and now Ron is spitting food at him.  He has a hard lot.
Yorkshire pudding requires beef drippings to make.  Meat drippings, in case you aren’t aware, are basically drips of melted fat that ooze out of the meat as it cooks.  It sounds totally nasty, but it is really flavorful and delicious.  And if you’ve ever had homemade gravy, you’ve had drippings, because that’s where all the flavor comes from.  Cooking the meat also adds a nice protein to your meal.  Coincidentally, it mentions Harry eating “a sizeable chunk of steak” (Rowling 181) in the same scene.
So before you can make the actual pudding, you have to make a beef roast of some kind and catch the drippings.  My mom made a small sirloin tip, which yielded just enough drippings for a two-person pudding.  I stuffed the meat with slices of fresh garlic by cutting holes in the meat all over the top and sides and sliding the garlic in. Then we coated it with lots of salt, pepper and garlic powder, and dabbed on some olive oil.  After that it was ready to pop in the oven on a broiler pan (this is a special pan that catches drippings well.  Click here to view) and bake. The temperature and amount of time depends on the size of your meat and how well done you want it. We baked our 2 lb roast at 400 F for about an hour, until the pop-up thermometer popped up.  For hints on cooking your particular roast, you can try consulting allrecipes.com.
Alright, now that that is taken care of, on to the pudding!
Yorkshire Pudding
(serves 2.  If you want to calculate for a specific amount of servings, click here for the source recipe on Allrecipes.com)
¼ cup and 2 tbps all purpose flour
1/8 tsp of salt
1 egg
3 tbsp water
2 tbsp beef drippings
3 tbsp milk
Add water and beat again until the mixture is light and frothy.  Refrigerate for an hour.  (That last bit is unnecessary.  I didn’t do it).
Here’s what it looks like.  It’s a little weird looking, I know.
We also made mashed potatoes, just because it seemed fitting.  I was delighted later, though, as I read the Goblet of Fire scene and saw this:

Follow this recipe for the best mashed potatoes you will ever make.  They don't even need gravy.  They're that good.
Mashed Potatoes
(serves 3-4)
4 small, peeled potatoes.
2 tbsp butter
½ tsp salt
1/3 cup sour cream
1 clove garlic, minced
Heavy whipping cream, to desired consistency.
1.      Chop the potatoes into small slices and boil until they are soft and a fork stabbed into them goes through smoothly.  Drain.
2.      Put potatoes in a large mixing bowl with butter, salt, garlic, and sour cream.
With a hand mixer, beat potatoes until they are smooth.  Add cream as you beat until you get your potatoes to the desired consistency. Be sure to taste the potatoes to make sure they are salty enough.  Serve. 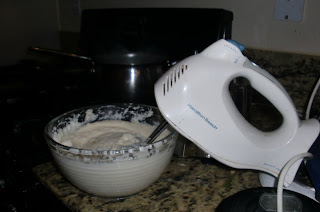 Here’s the whole meal.  My mom made cream of asparagus soup to go with it, but that’s not really part of the Harry Potter thing.  Leave a comment if you want that recipe.
Below is me trying the Yorkshire pudding.  I know it looks rather unappetizing, but it was delicious!  It tasted like a soft, buttery pastry with a little salt from the drippings.  I will definitely make it again!  But I still wouldn’t want Ron to spit it on me. 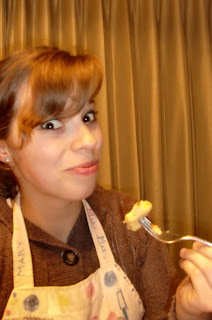 And for the fun of it, here are some of my England pictures of Harry Potter sites.  I will give you the names of the actual places.  Your mission, should you choose to accept it, is to leave a comment naming which Harry Potter movie each of them are from, and the context of that scene, if you can.
I apologize for the poor quality of the England pictures.  I had a 2 megapixel dinosaur at the time.  But I hope you had fun guessing!
Posted by Mary J. Locke at 2:27 PM

The second picture is of the famous "McGonagall stairs," where she greets the new 1st year students before being Sorted. (Sorcerer's Stone)

The third one is, of course, the Great Hall!

The last one is the Millennium Bridge, featured in Half-Blood Prince, destroyed by Death Eaters. It's not the bridge from the book, but it's a nice effect.

The first one I don't think I can get without cheating, but I'll guess--is it the scene in the first movie where Hagrid leaves Harry on his own to find Platform 9 3/4?

As a side note, my word verification is "Katies," which is just really awesome.

You are correct for all of them. Yay!