On this wonderful, joyous holiday that is mostly celebrated with large amounts of food, I felt it was my duty to post a new recipe. After our wild week last week with recipes every day, things have significantly toned down.  But don’t worry, we’re still here!  And for those of you Harry Potter haters... we got it out of our system.  You can read now.
A bit of sad news that is slightly Harry Potter related – I left my beloved camera, a graduation present I got in May, at the movie theater that night.  When I came back to the theater the next day to look for it, it was gone, and not in the theater’s lost and found.  I’m really really depressed about it.  I'm a very responsible person - I don't lose things, particularly not expensive things.  I really miss it.  I know it’s just a thing, but I loved that camera.  I used it all the time.  It’s my own fault, though, I suppose.  If I could physically give myself a roundhouse kick to the gut, I would.  It sort of feels like I already did.
So because of my camera loss, I had to use my webcam today, which is less than stellar quality.  In fact, it’s sort of like looking through a really blind person’s glasses.  The pictures are pretty blurry.  I’ll fix this camera situation soon, though, don’t worry.  This is just a temporary fix.  I hope.  (What I really hope is whoever took my camera will return it, but who am I kidding?)
Anywho, there have been a couple of granny smith apples sitting in my refrigerator for a while now, and yesterday my mom suggested baked apples.  I had never tried one, so, interested, I looked up a recipe.  It seemed easy enough.  And then as I looked at my notes for the blog, I realized that baked apples were actually mentioned in literature!  Here’s a quote from Jane Austen’s Emma.  For those of you familiar with the story and characters, this is the overly talkative Mrs. Bates speaking.

“About the middle of the day [Jane] gets hungry, and there is nothing she likes so well as these baked apples, and they are extremely wholesome... I have so often heard Mr. Woodhouse recommend a baked apple.  I believe it is the only way that Mr. Woodhouse thinks the fruit thoroughly wholesome.” (Austen 210) 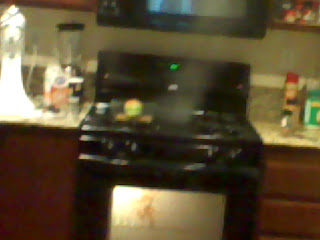 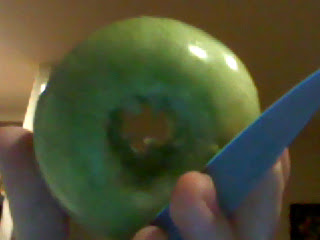 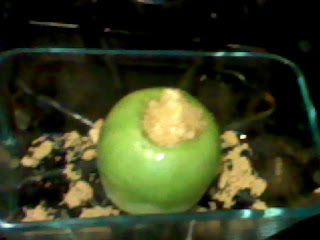 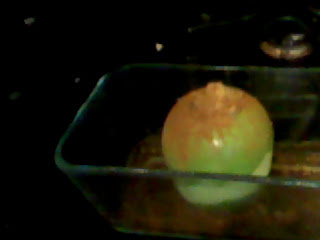 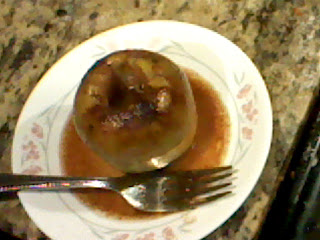 My apple took a while to get to the tenderness I wanted.  I was hoping for a super soft apple, like in apple pie, but it was a little firmer than that.  It was still delicious, though, and with the uber buttery sauce, it was a “wholesome” yet tasty fall treat.  If you want, you can even thicken the sauce by putting it in a pan and boiling it down into a sugary syrup, or just add a little corn starch.  Then you could have vanilla ice cream with your apple and drizzle your apple-cinnamony sauce over all of it.  Mmmm...
The beauty of this recipe is that you don’t have to worry when you make more than one.  It’s the same for each individual apple.
Well, I’d better go.  It’s nearly 4:00 a.m. and I’ve got stuff to cook tomorrow.  Again, Happy Thanksgiving everyone!