The Truth about Sugar Plums

It’s Christmastime!  I love this time of year.  It’s an excuse to bake constantly.  I’ve got a list of a million wintery treats I want to make, such as peppermint bark, gingerbread, Austrian nut bars, chocolate truffles, and so on.

As I was on the prowl for a treat I could make for the blog, I ran across something simple and yet completely unfamiliar in the classic poem, “Twas the Night Before Christmas,” by either Clemente Clark Moore or Henry Livingston Jr. (Mysterious author... How intriguing).  That treat would be sugar plums.

I had a hard time chopping out a quote from this poem, because I love it all so much.  So you can listen to the narration of the entire story on this youtube video if you're like me and want to hear the whole thing. Otherwise, see the quote below the video.


I'd like to highlight the important line: “The children were nestled all snug in their beds, / While visions of sugar-plums danced in their heads” (Twas the Night Before Christmas).

As a child, whenever I read or heard this story and thought of sugar plums dancing in children’s heads, I would picture something like this: 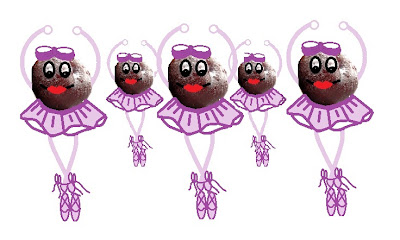 You know, plums with sugar on them, dancing.  The ballerina bit might be The Nutcracker's Sugar Plum Fairy getting in the way, but this is mostly what I pictured.  Oh how inaccurate I was. As it turns out, the name of this Christmas treat is extremely misleading.  Sugar plums have nothing to do with plums.  They have no plums in them, and they bear little resemblance to the pre-pruney fruit.  Apparently in the old days, plums referred to any dried fruit.  So I guess it kinda makes sense that sugar plums consist mostly of almonds, dried apricots, and dates.

Now, if you are like me, you’re probably wrinkling your nose right now.  I despise almonds, along with almost every other nut, and dried apricots are far too sweet.  Not to mention dates, which taste alright, but every time I look at them, I can’t help but picture this:


Sorry, I’ve probably ruined dates for everyone now.  Just be thankful that I didn’t go all OCD on you and get really detailed in my cockroach representation.  I almost did.

Anywho, despite my dislike for the three main ingredients, I decided to make a very small batch, so that I could say I had actually tried sugar plums.  And also so I would have something to post this week.  Fortunately, I was pleasantly surprised.  They weren’t overpoweringly nutty or apricotty.  The flavors blended together well and once I finished one, I immediately wanted another.  The sugarplum recipe is nearly universal on every site.  My source is the Use Real Butter blog.  I cut the recipe back to a third, which is why the measurements are a little odd.

Preheat oven to 400F. Arrange almonds on a baking sheet in a single layer and toast in oven for ten minutes. Set aside to cool and then finely chop or blend in a blender.  Meanwhile, combine honey, orange zest, cinnamon, allspice, and nutmeg in a small bowl. Mix almonds, apricots, dates and spice mix in a large bowl. Mix well, using you hands (make sure they’re clean!). Pinch off rounded tabelspoon-sized (for large) or teaspoon-sized (for small) pieces and roll into balls. Dust the sugar plums with powdered sugar, place a clove in each as a stem, and refrigerate in single layers between sheets of wax paper in airtight containers for up to one month.


Pictures
As luck would have it, I already had toasted almonds, so I just tossed them into a blender.
Due to my own idiocy, I accidentally grated 2 tablespoons of orange zest instead of the recommended 1 teaspoon.  I didn’t realize it until I’d already mixed in the honey.   Surprisingly, this wasn’t such a terrible goof.  It just made the sugar plums have a stronger citrus flavor.  If you’re worried about not liking sugar plums, but you like orange, try grating a ½ tsp or so extra orange zest.

Now, I have an issue with sugar plums being called such when they look nothing like plums.  The original recipe doesn’t even have the cloves for stems.  So I took the liberty of adding the stems, as well as dying the confectioner’s sugar a light purple.
In order to dye the sugar, stick it in the blender.  Then make a small well in the center of the sugar and drop in a couple drops of blue and red food coloring.  I used a tiny bit more blue than red.  This actually works way better if you have the watery food coloring instead of the fancy gel colors.  Blend the powdered sugar a minute at a time and keep adding coloring until it gets to a tint with which you are satisfied. 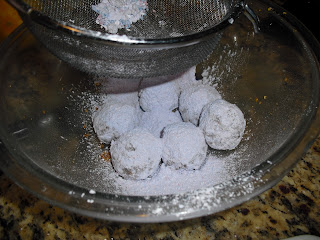 I used gel coloring, and I got little chunks of coloring that didn’t blend, which you can see sitting in the sifter.
It was exciting to make something I had only heard about in a children’s poem (and seen as a fairy in a ballet).  I’m happy to be a little less ignorant about traditional Christmas treats.  And despite my assumptions when I read the recipe, it actually turned out to be really good!  Not to mention very easy to make.  I definitely recommend it.
“Happy Christmas to all, and to all a good night!”
Posted by Mary J. Locke at 8:54 PM

1.Hooray! You did math!
2. I totally agree with the roach/date thing.
3.I was wondering how you could dye sugar--do you think it could work with granulated sugar?
4.You know you are a germaphobe when you tell people to wash their hands in your post.

I followed this for coloring sugar:
http://www.ehow.com/how_2087299_tint-sugar.html

It has both granulated and powdered sugar tips.

I dye granulated sugar sometimes, it's way easy, and a quick way to make decorated sugar cookies for the kids and have less mess.

Your "date with a roach" totally cracked me up. I even made Jedd look, since he always says that. I want to see the details!

Thanks for demystifying sugar plums, I loved the dancing picture since it precisely summed up what I've always pictured (I memorized that poem in 4th grade and quoted it to the class). They sound really good, and your stems were cute.