Brrrrr!  It’s starting to get chilly outside, isn’t it?  Even here in California it’s pretty gray out. It’s the sort of weather that makes you want to don a sweater and drink something nice and warm.  How does a big cup of rich hot chocolate sound?
One of my all time favorite books is A Wrinkle in Time by Madeleine L’Engle.  We were supposed to read it as a family when I was a kid, but once we started I was too hooked to wait for everyone to read a little bit together every night.  I secretly went into my mom’s room while she was a work and took the book.  I read it all in a day or two, which is impressive for a ten year old.  Since then I’ve read it several more times – It’s that awesome!
The book opens: “It was a dark and stormy night.”  A little bit of a cliché opening, but L’Engle handles it well.  She describes a chilly, blusterous storm and the main character, Meg, trying to bundle up in a quilt.  Meg and her little brother, Charles Wallace, go downstairs to brave the storm with a cup of hot cocoa.
“You’d better check the milk,” Charles Wallace said to Meg now, his diction clearer and cleaner than that of most five-year-olds.  “You know you don’t like it when it gets a skin on top”*
“You put more than twice enough milk.” Meg peered into the saucepan.
Charles Wallace nodded serenely.  “I thought Mother might like some.”
“I might like some what?” a voice said, and there was their mother standing in the doorway.
“Cocoa,” Charles Wallace said.  “Would you like a liverwurst-and-cream cheese sandwich?  I’ll be happy to make you one.”
“’That would be lovely,” Mrs. Murry said (L’Engle 10).
(Being the English nerd that I am, I have to do a works cited or I will spontaneously combust.)
L’Engle, Madeleine. A Wrinkle in Time. New York: Bantam Doubleday Dell, 1962.
Nothing like hot chocolate on a blustery, cold night.  And my mom’s old recipe is just what you need to warm up.
Hot Chocolate
½ cup semi-sweet chocolate chips
1 1/2 -2 cups water
3 tablespoons sugar
2-3 cups milk
1 tsp vanilla extract
Melt first 3 ingredients, stirring constantly, until it becomes a smooth syrup and starts boiling.  Add milk and vanilla.  Heat for 3-5 minutes more until smooth and hot.
Serves 3-4
This hot chocolate is very chocolaty and rich, and the touch of vanilla makes it positively heavenly.  Cooking lesson number 1: when it comes to sweets, you can never have too much vanilla.  Alright, maybe you can, but it’s a rare occurrence.  I usually put in 1.5 x the amount of vanilla called for in the recipe.  Not this recipe, of course, because it already has that extra amount in it.  But seriously, don’t go skimpy on the vanilla.
And this hot chocolate just isn’t complete without homemade whipped cream and a sprinkle of cinnamon. 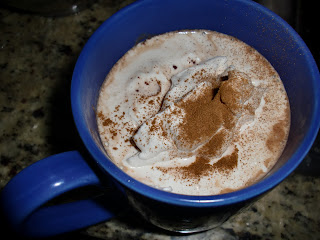 Whipped Cream
1 cup heavy whipping cream
¼ cup sugar
1 tsp vanilla.
Begin whipping the cream on high speed and add sugar and vanilla slowly.  Continue whipping until stiff peaks form.  Don't over-whip, or it will lose it's smooth texture.  Whipping also works faster if you chill the bowl and beaters first.
*In reference to the “skin” that Charles Wallace mentions, it is what happens when you heat up milk too hot.  As it cools, you’ll notice a wrinkly skin on top of your milk, sort of like when reptiles shed their skin.  It looks really gross.  Don’t worry, though, your hot milk is not ruined if that happens.  Just skim it off the top and wash it down the sink, and the rest of your milk is perfectly fine.

Now the question is: What is a liverwurst sandwich?  Yeah, I didn’t know either, which is why I consulted good ol’ Wikipedia. Apparently liverwurst comes from Germany and means “liver sausage.”  Mmm, doesn’t that sound yummy? (Note the sarcasm) It usually comes from pork.  It has all sorts of typical kitchen cupboard spices in it, such as thyme, allspice, black pepper, ground mustard, and even nutmeg.  There might be other stuff in it too, like mushrooms or bacon.
Elise, a contributor to SimplyRecipes.com, writes about liverwurst sandwiches.  In an entertaining way, she acknowledges that yes, liverwurst sounds disgusting, but that it’s actually quite good.  She even revealed that there’s a good place to get it – Morant’s Old Fashioned Sausage Kingdom in Sacramento – which is right next door to me.  What do you think - should I try it? Or should we make Julie try it?
If you would like to try Elise’s liverwurst sandwich “recipe,” (it’s just slapping some liverwurst on some bread, basically) you can find it here.
If you want to find some liverwurst in your own area, you can try a special meats store or a local delicatessen.
As for me, I think I’ll just stick with the hot chocolate.
Posted by Mary J. Locke at 10:04 PM

Very nice! I definitely want to make this hot chocolate...and I almost want to make the liverwurst sandwich. I do need to give that book a whirl though. Sounds delightful. :)

Ok, I'm a dork. I keep thinking about it and I'm almost positive I read that book a million years ago..